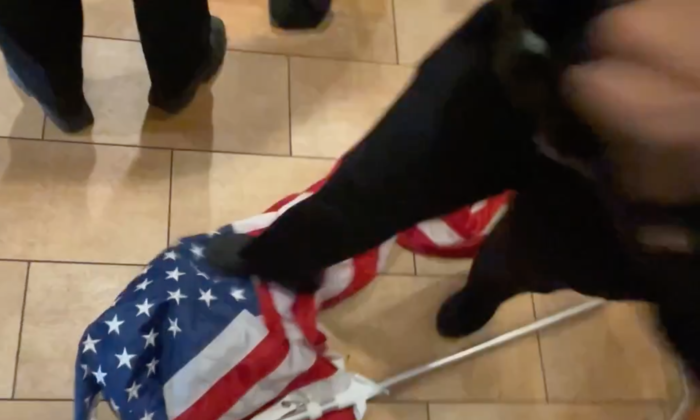 NYPD Officer Throws American Flag on Floor, Tramples It During Scuffle With Protesters

An NYPD officer who was removing anti-vaccine mandate protestors from a Panera Bread in Brooklyn, New York, on Dec. 19, forcefully grabbed a pole with an American flag from one of them and threw it to the floor, subsequently trampling it during the scuffle.

As two other NYPD officers proceeded to arrest Mitchell Bosch, an Army veteran who has been protesting against NYC vaccine mandates, the police took the flag from Bosch’s hand.

As another protestor picked up the flag, a female officer forcefully took it from him and threw it on the ground, stepping on it multiple times. Amid the chaos, it’s unclear if it was intentional.

The protestors were being told to leave because they didn’t show vaccine passports.

“It’s disrespectful. It is un-American and it is unconstitutional,” Bosch told The Epoch Times.

“When I was giving the Constitution of the United States [to the police officer], he was like, ‘Get that off me,'” Bosch added. “It’s the same thing. At a minimum, you should be cool about it. Because they need to keep it cool and calm under pressure. That was my job when I was in the army.”

As for why he was protesting at the police station, he said he was “trying to prove a point to America—we’re upside down. We’ve gotten away from the values of our founding fathers. We the People are not being represented correctly by our elected officials.”

The Epoch Times reached out to the NYPD for comment on the incident.

“On December 19, 2021, at 3:07 p.m. inside of the Gateway Center Mall Panera Bread store, police received a 911 call for a disorderly group at the location refusing to leave the location,” Sergeant Edward Riley, a DCPI spokesperson, wrote via email. “Officers responded to the location and made multiple requests for the individual to leave. After refusing to leave and being advised that he was trespassing the male was taken into custody without further incident. The individual was issued a summons.”