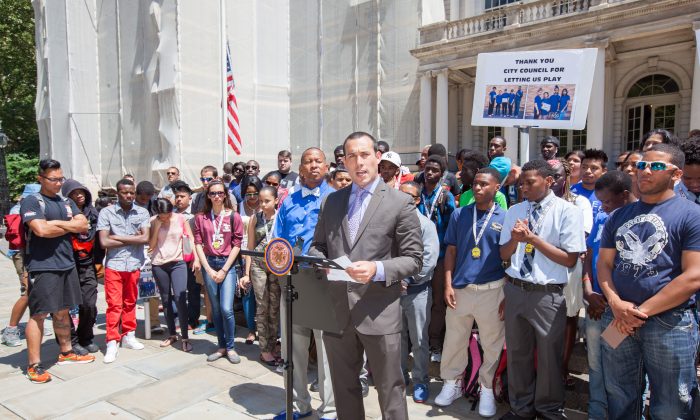 NEW YORK—Some 1,700 high schoolers have a reason to celebrate, as their athletic league was saved in the city’s final budget negotiations.

The council originally proposed $1.25 million for the league, but the mayor’s executive budget didn’t pick up the item. The $825,000 will suffice to keep the league afloat, but won’t allow it to realize additional services, such as tutoring, according to David Garcia-Rosen, founder of the SSAL.

Garcia-Rosen called the deal “a foot in the door,” a steppingstone to get the funding expanded and possibly base-lined next year.

SSAL was founded in 2011 to serve high schools with less than 500 students, especially those with a high population of English learners and a large overage population. Such schools have little-to-no chance of getting sports funding from the official Public Schools Athletic League (PSAL).

Councilors Andy King and Daniel Dromm were among the strongest advocates for the league’s survival.

The city’s Education Department plans to set up a new league within PSAL to serve smaller schools and more diverse populations, but Rosen said he would prefer his league to be funded and run separately. He believes the league would expand faster as a stand-alone than under the department.