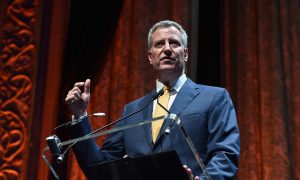 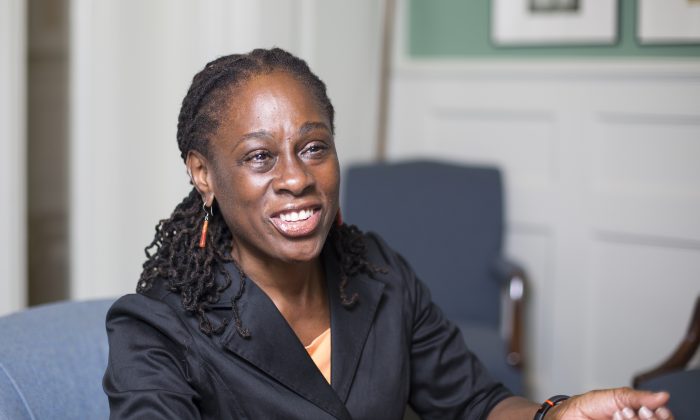 NEW YORK—When a distressing life event affects you so deeply and personally, you find yourself at a crossroads. You are confronted with a choice of how to react to it: ignore it, or do everything in your power to affect positive change. New York City’s first lady Chirlane McCray found herself at such a crossroads. She decided to help plan initiatives for improving mental health services in the city. Her overarching vision is nothing short of challenging the Cartesian mind-body split so prevalent in Western medicine.

When McCray discovered that her daughter, Chiara de Blasio, had been diagnosed with anxiety, depression, and substance abuse disorders at 18, she felt everything that any mother would feel.

“It was so painful and so frustrating. … It’s hard to even describe,” McCray said in the light-green Staten Island room of City Hall during an interview on Aug. 11.

At first she was shocked. If you ever see Chiara in action, you can see how warm, charismatic, and intelligent she is—with everything going for her, McCray explained. It was hard to fathom how much Chiara had been suffering or how the symptoms had gone unnoticed for so long.

The average age by which the symptoms manifest, such as stomachaches, anxiety, insomnia, not being able to get out of bed, weight gain, and so forth, is 14. Untreated clinical depression can lead to serious problems, such as increasing chances of drug or alcohol addiction, it can ruin relationships and cause serious setbacks at work, it affects physical health, and can lead to suicide.

“There were so many symptoms that we didn’t pick up on,” McCray recalled her daughter getting moody or staying in bed too long. She said she thought at the time, “This is what teenagers do.”

Chiara had always been a good student. Still McCray and the mayor, Bill de Blasio always knew she could do better. “We were trying to figure out why ­­­­­­­­­­­­­­­she wasn’t taking it to the next level, because she’s clearly capable, something was holding her back. Now we know,” McCray said.

Chiara, revealed her struggle with depression in a video produced by the mayor’s transition team right before her father took office in December 2013.

Now 20 and a college junior, Chiara continues to help raise awareness on how to overcome depression and substance abuse. She helped launch the city’s new mental health texting service, NYC Teen Text in March. Teens at participating schools can text “NYC Teen” to 65173 to get information and access to confidential counseling for free.

One in four adults has a diagnosable mental health condition and the average time of treatment is nine years after symptoms manifest.

I want one door to wellness, so you walk in that door … and you are treated holistically.
— Chirlane McCray, first lady, New York City

When McCray began helping her daughter, she realized that no established series of steps were in place for seeking adequate care and treatment.

“I’m a person who has a network of those I can call on, I have health insurance, I have resources, and still I was totally flustered,” she said and wondered, “How do people who have far less than I do, how do they manage this experience?”

In retrospect she also realized that her own parents had suffered from depression, which can be hereditary (about 40 percent of cause is genetic). As a child she just knew her parents were sad, but did not know at the time that they had a diagnosable condition with a cure.

“My father would withdraw. He wouldn’t talk to us on some days. It might be a ‘good morning’ and a ‘good afternoon,’ but that was it. But we didn’t know, we tiptoed around him and my mother was very quiet,” McCray said. It was only from doing research and asking a lot of questions that she started connecting the dots. Perhaps at another time or another place, her parents could have been treated.

A $78.3 Million Investment for Mental Health

Those experiences and realizations have catalyzed her full-hearted drive to work on the city’s plan to create a more effective and inclusive mental health system with the $78.3 million investment from the Executive Budget that the Bill de Blasio administration announced in early May.

When she sat down with key leaders in government, she was astonished to discover that no one had actually examined the various mental health programs and services in the city in more than 30 years.

So for months McCray, with her team, has been researching and examining the current status of mental health services. They started by carefully looking at areas where people are experiencing the most trauma, such as families in homeless shelters. As she prepares to break new ground, the tasks ahead can seem rather daunting.

“There are children with their parents who are going through tremendous trauma. And yes, they need a bed, but you know what, they need emotional support so that they can actually function day to day and get to a place where they can take advantage of services,” McCray said.

Looking at a broader picture as both a pragmatist and idealist, McCray actually envisions a health care system that would regard mental health with the attention it actually requires.

“First of all there would be no separation between physical health and mental health because it’s all one,” McCray said. “I want one door to wellness, so you walk in that door … and you are treated holistically,” she added.

She finds it incomprehensible that we know for a fact that one in four adults has a diagnosable mental health condition, and it’s hardly talked about. If it were the flu, measles, or worse, it would be a crisis. But she said, “We lose far more people because of mental health [conditions],” for example people who do harm to themselves, to others, or who commit suicide.

She believes that primary care physicians are key. “Ideally they would practice in groups so that you would have a primary care physician who’s trained in physical health, and maybe one other specialty, but would also have someone who is trained in mental health,” she said. Social workers would also have to be available “because you can’t treat people in isolation, you can’t take them apart, like this is the physical silo, this is the mental silo, but oh by the way, here’s the family that’s contributing to this,” she said.

McCray also advocates mental health services at schools, whereby in addition to children getting their eyes and ears checked, they are also evaluated for any kind of distress or trauma they maybe experiencing, for example, domestic violence at home.

Her vision is to provide services that would treat the whole child, and promote healthier families and communities. That would also include extracurricular activities.

“We’ve had a trend to defunding physical education, and defunding the arts—all the things that so many people use to heal,” McCray said speaking from her own experience. She turned to writing, music, and sports for solace at a young age. In high school she started writing poetry.

“That was a lifesaver for me, it really was between the writing and the Y and music, that kept me alive.” She noted that we cannot expect children to thrive unless we provide them with opportunities to express themselves in constructive ways.

We Are All Healers

When asked to sum up her philosophy in life McCray said, “We can all be healers for some people in our lives, and that really starts with the individual and how we make use of our talents and our strengths.”

She knows, just from being out there talking to people, that “sometimes all it takes is having a conversation with somebody to pull them out of that hole that they are going into. You can save a life with talk therapy. Now I find that very powerful,” she said. “You don’t have to have a medical degree to actually have a healing effect and change somebody’s life,” she added.

This fall the administration will release the road map of the plan for building a better and more accessible health care system for New Yorkers.

“This Is New York” is a feature series that delves into the lives of inspiring and prominent individuals in New York City. See all our TINYs here: epochtim.es/TINY or follow @MileneFernandez on Twitter