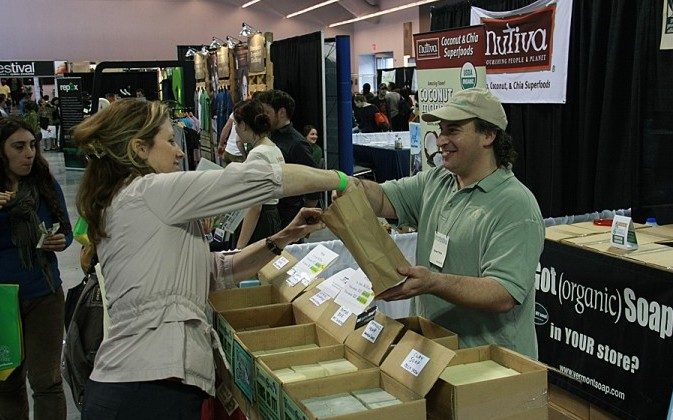 A visitor attending the NYC Green Festival at the Javits Center on Saturday. This year marks the first time the festival has been held in New York City. (Christian Watjen/The Epoch Times)
US

The organizers Global Exchange and Green America have held Green Festivals for ten years with over one million attendees in eight cities across the country. One goal of this nonprofit event is to “celebrate what’s working in our communities and find the sustainable solutions that fit your lifestyle,” according to Denise Hamler, Green Festival director in a press release.

An exceptional feature of Green Festivals is that companies attending the Green Marketplace have to pass a screening process to ensure that they meet minimal ecological and social standards.

The company and event co-sponsor Guzu was one of the exhibitors at the fair. Based in Deer Park on Long Island, Guzu works to combat the increasing problem of electronic waste, which is often dumped at landfills. The company offers private consumers, businesses, and schools a 100 percent recycling service for a wide range of, though mostly newer, electronic gadgets.

In exchange, the company not only gives cash but promises to plant a tree for every item received. According to co-founder Pano Stavrakas, after a year in operation Guzu is quickly growing with its green business model, receiving up to 30 percent more items to recycle each month.