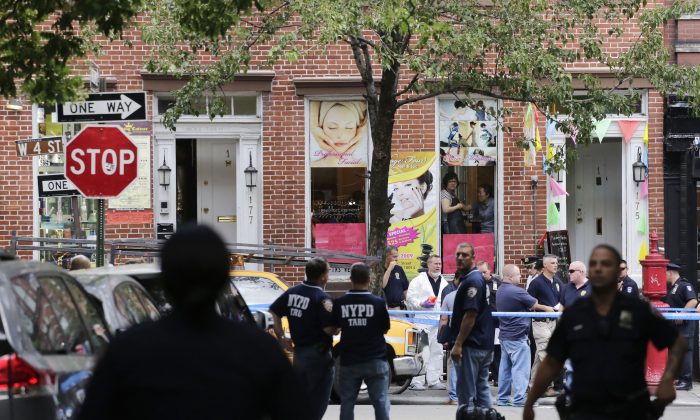 Police officers stand guard at the scene of a shooting, Monday, July 28, 2014, in the Greenwich Village neighborhood in New York. Authorities said a sex-assault suspect got in a shootout with law enforcement in New York City that left the suspect dead and two federal marshals and a police officer wounded. (AP Photo/Mark Lennihan)
Crime and Incidents

The suspect who shot an NYPD police detective and two federal marshals has been identified as one Charles Richard Mozdir.

The shooting incident in New York City occurred just after 1:00 p.m. on Monday, a police fugitive task force got into a shootout with Mozdir, who is a sex-assault suspect.

The shooting, which took place in Greenwich Village near New York University, started after the police task force tried to serve a warrant outside a smoke shop just north of a busy subway station.

It is uncertain if the shooting took place inside or outside the shop.

Mozdir was killed in the fire fight, while two federal marshals and the NYPD cop were wounded.

The injured officers were taken to Bellevue Hospital and are now in a stable condition, according to New York Police Commissioner William Bratton and Mayor Bill de Blasio.

“We pray everything we are hearing is true and that these officers will be OK in the long run,” de Blasio said.

According to CNN, Mozdir, 32, was recently featured on the news station’s television programme, “The Hunt” with John Walsh.

Mozdir was accused of abusing a young boy while babysitting him.

Authorities later found evidence of child pornography and bestiality on his cellphone and computers, according to the show’s website, quoting federal authorities.

According to the show, authorities have searched for him in Coronado, Georgia, California and Mexico since he posted $250,000 bail in a California case on June 15, 2012.

A $1 million bench warrant was issued for Mozdir’s arrest after he skipped an arraignment in San Diego Superior Court on child sexual assault charges, according to Steve Walker, a spokesman for the San Diego County district attorney.

Mozdir was wanted on five counts of lewd acts upon a child younger than 14 and a charge of attempting to keep a witness from prosecuting a crime, according to the criminal complaint.