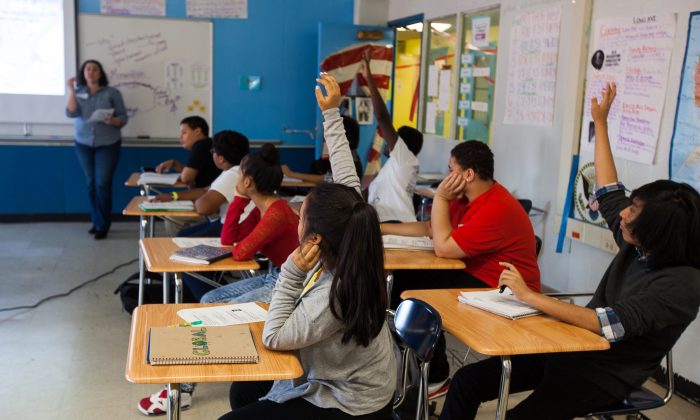 A classroom at the MESA Charter High School in Bushwick, Brooklyn, N.Y., on Oct. 28, 2014. With the New Year upon us, a host of changes in education is set to mark the lives of the city’s students, parents, and educators alike. (Petr Svab/Epoch Times)
New York

NYC Schools to Turn More Pleasant for Students, Less for Teachers in 2015

With the New Year upon us, a host of changes in education is set to mark the lives of the city’s students, parents, and educators alike.

While students can expect a loosening up of Mayor Bill de Blasio’s liberal policies, teachers and administrators may face stiffer control pushed by Governor Andrew Cuomo.

Education is expected to be a major part of policy debates on the city and state levels—each to impact New Yorkers’ lives in 2015.

The mayor is expected to allow cell phones in schools.

Students may see some positive changes. The mayor is expected to allow them to use cell phones in schools, or at least let individual schools decide their own cell phone policies.

De Blasio’s Education Department is also expected to do away with suspensions for “insubordinate conduct.”

Over the next two years, the mayor is pumping $150 million into 94 schools marked by the state as struggling. All of them will be turned into community schools, offering wrap-around services like tutoring and after-school activities.

Also notable, de Blasio’s administration made a point of discouraging schools from excessive test prep. Though the tests are mostly federally mandated, the atmosphere of less emphasis on testing may boost students’ morale.

Teachers on the other hand, may feel a little less joyful as Gov. Andrew Cuomo hints at making their evaluations tougher.

He said he would push for revamping the systems so it is more “accurate.”

Cuomo already took the first step Monday vetoing his own bill that was to protect teachers and principals for two years from failing the evaluations due to poor state test scores of their students.

De Blasio’s administration made a point of discouraging schools from excessive test prep.

Improved scores make up 20 percent of the evaluation. Another 20 percent is based on test scores but using a method locally decided by schools. The other 60 percent is mostly based on classroom observations.

Yet, if the scores don’t rise enough for two years in a row, the teacher will be marked ineffective and can be fired, even if acing the observation part of the evaluation.

Cuomo’s bill was intended to give teachers leeway to adapt to new tougher tests introduced last year and based on the Common Core learning standards. But, since less than one percent of state teachers were rated ineffective, Cuomo vetoed the bill as unnecessary.

Whether Cuomo will manage to make the evaluations harsher depends on what will be digestible for the legislature. While the Republican-controlled Senate would probably favor the idea, the Assembly, where the teachers’ union pulls significant weight, may oppose it.

Cuomo’s Monday veto even further strained his relationship with the state teachers’ union, which already refused to endorse him for reelection.

Charter Schools, publicly funded but privately operated, are still in demand and continue to expand. Since last year they have enjoyed unprecedented privileges in the city, despite de Blasio’s lack of enthusiasm for them.

Thanks to a change in law pushed through by Cuomo and the Senate, any charter school opening in the city must be granted space in a public school building. Otherwise the city has to pay for a private space or give the school more money so it can get space on its own.

There are 197 charter schools in the city with 31 more slated to open. But above that, the state law only allows another 25 to open in the city. Having charter school supporters among his campaign contributors, Cuomo is expected to seek expanding the cap on charter schools as part of the upcoming budget negotiations.

De Blasio repeatedly mentioned a wish to change the admission process for the city’s eight elite high schools, from a single standardized test, the SHSAT, to multiple measures. The shift would require a change in the state law, which is unlikely, according to Joseph Viteritti, Hunter College professor of public policy.

Several non-profits filed a civil complaint two years ago with the federal Education Department saying the SHSAT unfairly puts students of color at a disadvantage.

If a decision is reached in 2015, the city may have to immediately change the admission process.

The final number will not only strain the already scarce classroom space, but also raises the question of funding.

The mayor squeezed $300 million a year for the program from fiscally conservative Cuomo. It remains to be seen if that will be enough when the program swells another 40 percent.

There are several other potential changes to the education playing field.

The Regents are looking for a new education commissioner, as John King, Jr. is leaving for a job in the federal Education Department. But since the current Regents Chancellor Merryl Tisch would have the biggest say on the decision, the new commissioner is expected to be in line with the agenda of his predecessor.

Another potential change is mayoral control of city schools. The law that grants the mayor extensive control over the system expires in 2015. Whether it will be renewed and to what extent depends on de Blasio’s ability to lobby the legislators and the Governor.