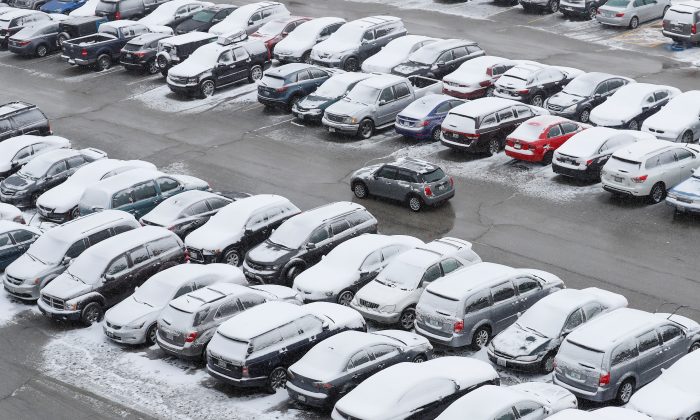 Cars are covered in snow in a general parking lot during the snowstorm at O'Hare International Airport in Chicago, Illinois, U.S., on March 13, 2017. (REUTERS/Kamil Krzaczynski)
New York

NYC Schools to Close Tuesday Due to Pending Blizzard

NEW YORK/BOSTON—A fast-moving winter storm was expected to hit the northeastern United States, forecasters warned on Monday, threatening to snarl travel and knock out power while prompting some city officials to order schools to close on Tuesday.

The National Weather Service issued blizzard warnings for parts of Pennsylvania, New Jersey, New York and Connecticut, with forecasts calling for up to 2 feet of snow in places by early Wednesday, with temperatures 15 to 30 degrees below normal for this time of year.

Some 50 million people along the Eastern Seaboard were under storm or blizzard warnings and watches.

“I strongly urge everyone to limit unnecessary travel on Tuesday and if you must ‎drive, please plan ahead, be careful, and stay safe,” Cuomo said in a statement, adding that commuters should expect road closures, delays and cancellations.

The storm comes near the end of an unusually mild winter along much of the East Coast with below-normal snowfalls in cities such as New York City and Washington.

Boston was braced for up to a foot (30 cm) of snow, which forecasters warned would fall quickly during the storm’s expected peak on Tuesday, making travel dangerous.

“During its height we could see snowfall rates of one to three inches (2.5-7.6 cm), even up to 4 inches (10 cm) per hour,” said Alan Dunham, a meteorologist with the National Weather Service in Taunton, Massachusetts.

Winds were forecast to gust up to 60 miles per hour (100 kph) in spots, potentially causing power outages and coastal flooding.

New York City and Providence, Rhode Island, went ahead and canceled public schools in anticipation of the storm.

The Port Authority of New York and New Jersey prepared hundreds of pieces of snow equipment at the three major New York area airports. Thousands of tons of salt and sand were prepared for airport roads, parking lots, bridges and tunnels.

But the New York Stock Exchange vowed to remain open for the tiny fraction of trades that still take place on the trading room floor on Wall Street.

“We haven’t closed due to inclement weather since 1996. We have a range of contingencies, and as of this moment it will be business as usual,” spokeswoman Kristen Kaus said.

Washington, D.C., which often bogs down with even low levels of snow, was expecting 5 inches and twice that in outlying areas.