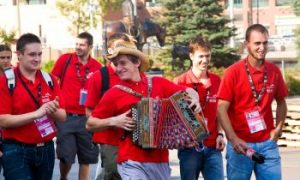 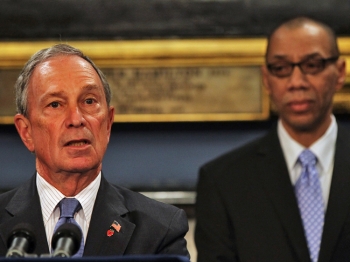 By Tara MacIsaac
Print
NEW YORK—It's been a bumpy road for former media mogul Cathleen Black since Mayor Michael Bloomberg appointed her Schools Chancellor in November. Now, after three months in office, it’s all over.

Mayor Michael Bloomberg announced Black's resignation and the appointment of Deputy Mayor Dennis Walcott as her replacement on Thursday.

“Cathie and I had a conversation this morning, and we both agreed the story had become about her and it should be about the students and this is the right thing to do,” said Bloomberg.

A reporter asked if the mayor's mention of “story” indicated the media had a major role in how this played out. Bloomberg parried the question, stating simply, “it is what it is.”

The media hoopla surrounding Black's surprise appointment—a woman successful in business but without experience in the field of education—was aggravated by a series of attention-grabbing slip ups.

In January, shortly after officially taking the post, she made an inappropriate joke about birth control being the answer to overcrowded schools. In a press conference shortly after this incident, the mayor cut Black's response short and stepped in to apologize for her. She is unaccustomed to being in the public eye, explained Bloomberg.

A Marist poll released Monday showed Black's approval among voters sits at a dismal 17 percent. Four of the eight deputy education chancellors left over from former Chancellor Joel Klein's term have resigned since she took office—two of them left just this week—suggesting her approval rating within the department has been similarly lacking.

“I think she has done an admirable job plunging herself into the work,” said Bloomberg, adding that he has “nothing but respect and admiration for her.” While giving her an “A” for effort, he added that “she loves New York and she wants to do what's best for the families and students that we serve.”

While one short-lived public service career came to an end, another took a hard hit. Bloomberg's third term is just about half way through and his approval rating is at an all-time low—39 percent according to a Quinnipiac University poll released in March.

The mayor, ever-adamant in his support of Black through all the bad press, now has to live with this admitted failure. He apologized for dropping the snow ball, so to speak, in the December blizzard, and Thursday morning he found himself again expressing his apologies to New Yorkers, this time over a much criticized decision to appoint Black in first place.

“I take full responsibility for the fact that this has not worked out as either of us had hoped and expected,” Bloomberg said.

Just as he did in the weeks following the blizzard, the mayor insisted he will not dwell on past mistakes, but will instead move forward and do better in the future.