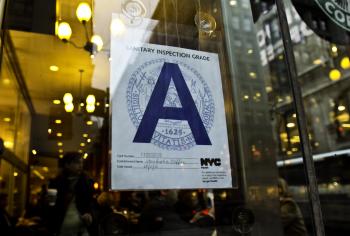 MAKING THE GRADE: A Starbucks coffee shop proudly displays their health inspection grade. Of the restaurants the City has so far graded, 57.2 percent have received an A grade. (Phoebe Zheng/The Epoch Times)
US

NYC Restaurants Get ‘A’ for Sanitation

Tara MacIsaac
Tara MacIsaac is an editor and reporter who has worked on a variety of topics over the course of her ten years with The Epoch Times, including science, the environment, and local New York news. She is currently working with The Epoch Times edition based in Southern California.
View profile
Follow
biggersmaller
Print
NEW YORK—The Health Department began awarding restaurants letter grades six months ago for sanitation, which have to be posted in sight of all passersby in the storefront window. In a review of the new system, the Health Department reports that the majority of New York's restaurants are A-class in terms of cleanliness and food safety. The report also shows those that didn't meet the standard are cleaning up under the new system.

“We started the restaurant letter-grading program for two reasons,” said Health Commissioner Thomas Farley in a video on the department's website. “First, to give people information they want to have about the restaurant inspections. Second, to provide incentive for restaurants to have better food-safety practices.”

By publicly posting the grades, customers are aware of the inspection results before entering an eatery. Diners can also find the results for each restaurant on the Department of Health website.

Businesses, in addition to having to announce to customers that they have received a B or C for sanitation, are also encouraged with violation fines to make the grade.

In the mayor's recent State of the City address, he made it clear that he does not want these inspections to hamper small businesses with hefty fines. As an additional incentive to get a top score on the initial inspection, restaurants will be relieved of any fines incurred from violations if they get an A right away.

Given the changes in the health-inspection system, restaurants are given two chances before a grade must be posted. A notable difference was found between initial and secondary inspections throughout the city.

Upon first inspection, only 27 percent of restaurants got an A, 41 percent got a B, and 32 percent got a C. Of those that received a B, 44 percent upgraded to an A on the second round. Of those given a C, 72 percent improved to the A or B level.

Restaurant owners and operators are going to school to get the grade. After four years of approximately 10,000 restaurant supervisors completing the Health Department food protection course, the number has increased to about 13,000 since the grading plan was announced. Several free workshops on how to meet the new standards have been offered in several languages over the last six months. They have been attended by approximately 2,300 restaurant representatives.

“Some thousands of people in New York City go to hospital emergency rooms with food-related illness,” said Farley. The idea of letter grading came from Los Angeles, the commissioner explained. “After they instituted putting letter grades on the front of restaurants, they saw about a 20 percent reduction in food-related illness. That's a big health benefit.”

Andrew Rigie of the New York State Restaurant Association told NY1, he thinks a C grade does not necessarily mean the restaurant is not safe.

"You can accrue over 1,000 points in this letter grade system, yet it only takes 28 points to get a C," said Rigie.