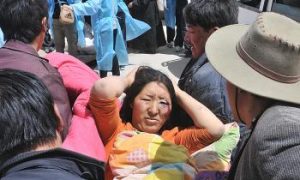 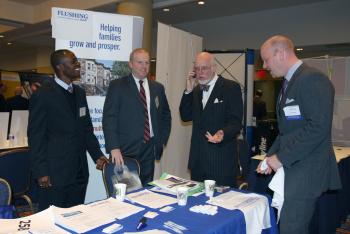 By Tara MacIsaac
biggersmaller
Print
NEW YORK—The annual NYC Real Estate Expo at the Marriott Marquis on Times Square brought together thousands of brokers, bankers, renovators, and others within the industry on Friday.

It was a place to connect, swap business cards, share experience and expertise, explore partnerships and employment opportunities, as well as to discuss hot topics of the real estate world and collectively assess the state of the market in the current economic climate.

Charles C. Schoenan, who acts as a guarantor for young people looking for an apartment in the city, spoke to a young real estate broker just stepping out of school and into the business.

Young people, especially foreign youth, find it nearly impossible to rent an apartment in the city, Schoenan noted. It’s not a matter of not having the money, he explained, as many landlords require a guarantor who lives in the tri-state area. Schoenan has acted as a guarantor for the grandson of a president of a European country, as well as for a young Middle-Eastern royalty who came to study in New York.

“I recommend you pre-qualify clients, so you don’t spend time working on their case and then they can’t get a place and you’ve wasted your time,” he advised the young broker.

Vernon Jones represents a real estate promotion company Live Open House. As an industry insider with his hand in several different ventures, he discussed some of the hot topics in the real estate world at the event.

“Bringing government together with developers is a big issue,” Jones said.

If a developer sets aside 20 percent of a building as low-income housing, they qualify for tax-exempt financing from the state Housing Finance Agency under the 80/20 program.

Not only are developers considering ways to cut costs, such as taking advantage of the 80/20 program, they are also looking for ways to build in an already developed city.

“There’s only one place left to build in New York—up,” Jones noted.

Rezoning is occurring in many areas throughout the city. The rezoning of Harlem in 2008 left some residents grumbling about slackened height restrictions.

“What was nice about [125th Street in Harlem] was that there weren’t any really tall buildings,” said Timothy Stockton, long-term resident of Harlem and employee at the Studio Museum on 125th Street.

Jones, however, was happy to be able to expand on a couple of buildings he owns in the East Village.

Some businesses represented at the expo looked to recruit employees. Ellen Golden, on the other hand, looked to recruit dissatisfied employees in need of financial guidance. According to Golden, the industry is suffering and some brokers are not making much money. She works as a financial planner for middle-class individuals, a career path she says is more suited to this economic climate.

A workshop called “The Rest of Your Real Estate Career: How the Real Impacts of the Economy, Social Networks, and Technology Will Affect You and Real Estate in the Next 20 Years,” among others, helped brokers and others to assess their position and prepare for the future.

Men and women in business suits came armed with stacks of business cards. They congregated around water coolers and the free coffee stand and forged bonds that could influence the future of New York real estate in years to come.