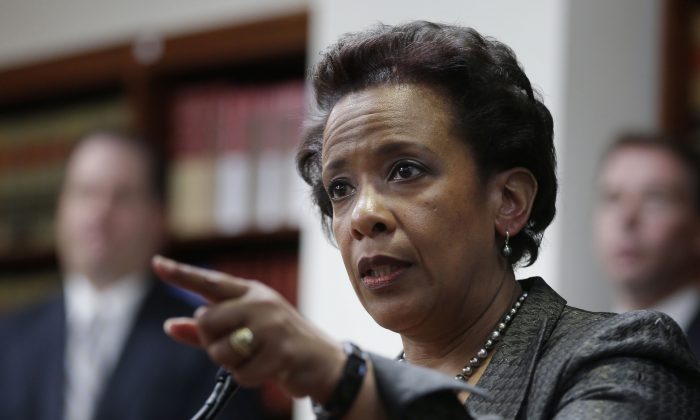 Loretta Lynch, U.S. Attorney for the Eastern District of New York, during a news conference in New York on April 28, 2014. Lynch could be one of a handful of contenders being considered to replace Eric Holder when he steps down as U.S. Attorney General. (AP Photo/Seth Wenig)
New York

NEW YORK—She’s an under-the-radar contender to become the first black woman to head the Justice Department.

Loretta Lynch rarely holds news conferences, does interviews, or gives speeches in her current job as U.S. attorney in Brooklyn.

But the lack of a paper trail on Lynch hasn’t kept her from emerging in recent weeks as one of only a handful of people still under consideration by the White House to replace the outgoing Eric Holder as attorney general.

The buzz over the 55-year-old Harvard Law School graduate was apparent as she sat next to Holder for his appearance at a ceremony last week in Brooklyn highlighting efforts to divert low-level offenders into drug rehab and job diversion programs, one of the attorney general’s pet causes.

In her introduction of Holder before an audience that included U.S. Attorney Preet Bharara of Manhattan—considered another attorney general contender —a judge made clear who she favors for the job.

“We all hope that the 83rd attorney general is in this room—someone who may be wearing a little orange thing,” said U.S. District Judge Carol Amon, referring to a colorful jacket Lynch had on.

A spokesman for Lynch later said she wouldn’t discuss her prospects, but her supporters were vocal.

“She has everything that we would want in an attorney general,” said Brooklyn District Attorney Kenneth Thompson. “She has intelligence, dignity, and the ability to be fair, but also tough. I have the utmost respect for her.”

Lynch, who grew up in Greensboro, N.C., began her career as a federal prosecutor in 1990. While a chief assistant U.S. attorney, she was on the trial team in one of the most sensational police brutality cases in city history, the broomstick torture of Haitian immigrant Abner Louima in a precinct bathroom.

She originally served as U.S. attorney in Brooklyn from 1999 to 2001 before entering private practice. She returned to the position in 2010 and was appointed to the Attorney General’s Advisory Committee, a position that required her to spend more time in Washington and drew her closer to Holder.

During her second tenure at one of the country’s busiest federal districts, Lynch’s office has won convictions in a thwarted, al-Qaeda-sanctioned plot to attack New York City subways, and charged the head of a Mexican drug cartel with 12 murders.

Still, Lynch has often been overshadowed by the media-savvy Bharara, whose office has prosecuted numerous headline-grabbing cases against terrorists, corrupt politicians, and Wall Street swindlers. But behind the scenes, she has won respect for dedicating much of her career to law enforcement without seeking publicity.

Thompson, who teamed with Lynch on the Louima case when he was an assistant U.S. attorney, recalled her cool under fire. “There was so much pressure to get it right. She was unflappable,” he said.

Seeing Lynch become the first black woman to serve in the position “would be inspiring to millions of people, especially children, to know what they could become,” he said.