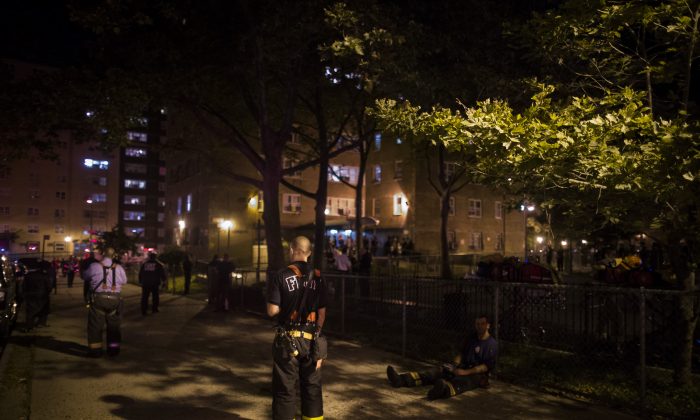 NEW YORK—The Fire Department of New York is mourning the death of a lieutenant who became trapped while looking for victims in a public-housing high-rise blaze, the first to die in the line of duty in more than two years.

Lt. Gordon Ambelas died Saturday after suffering multiple injuries while on the 19th floor of the 21-story building in the Williamsburg section of Brooklyn, officials said.

“We lost a real hero tonight and our hearts are heavy,” Mayor Bill de Blasio said of the 14-year veteran of the force. “I ask every New Yorker to keep the lieutenant in their prayers.”

Fire Commissioner Daniel Nigro told reporters that Ambelas sustained multiple injuries after he went into an apartment on fire to look for victims. He was found unconscious inside of the apartment and was removed by fellow firefighters, de Blasio said.

“Ambelas went into the apartment to search for life and did not come out, and by the time his brother firefighters found him, it was too late for him,” Nigro said.

It is the department’s first line-of-duty death since Lt. Richard A. Nappi was killed fighting a Brooklyn warehouse blaze in April 2012. Ambelas is the 18th to die since 343 firefighters perished in the Sept. 11, 2001, terrorist attacks.

A police officer, Dennis Guerra, died in April after he and his partner were overcome by smoke and carbon monoxide while responding to a mattress fire on the 13th floor of a Coney Island public housing complex.

Ambelas, a 40-year-old married father of two daughters from Staten Island, was among the firefighters honored last month for helping to save a 7-year-old boy who became trapped in a roll-down gate in May. The boy was pulled 15 feet off the ground when his arm and head got stuck.

Ambelas said at the time that the incident “shows that FDNY members are always ready to help others. It was great teamwork all around.”

The fire broke out around 9:30 p.m. Saturday in an apartment on the 19th floor of the building that is part of the six-building Independence Towers complex owned by the New York City Housing Authority. It quickly went to a second-alarm as flames spread to the 17th and 18th floors.