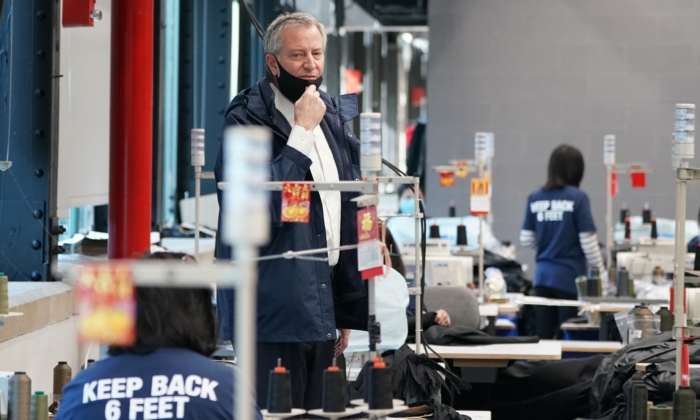 NEW YORK—New York City Mayor Bill de Blasio said on April 8 that the city’s need for ventilators is much lower than projected.

“In the last few days, we’ve actually seen fewer ventilators needed than were projected,” de Blasio said. “We expected the number of ventilators being needed being more and more going into this week. We’ve seen actually much fewer needed than we expected.”

Last week, the city’s daily need for ventilators grew by 200 to 300 units as hospitals dealt with a surge of COVID-19 patients. The growth has dropped off dramatically this week, with 100 or fewer ventilators added every day, according to de Blasio.

The mayor, a Democrat, said the city had sufficient ventilators for the week ahead. The city still needs more ventilators, “but much less than expected,” the de Blasio said.

“That’s a good sign. The hospitalizations have stabilized. For a long time that just kept going up and up. We’re now seeing some leveling off,” he added.

New York City is at the epicenter of the nation’s outbreak of the Chinese Communist Party (CCP) virus—commonly known as the coronavirus—pandemic. More than 3,500 people died of COVID-19 in the city, which had more than 75,000 confirmed cases as of April 7.

The mayor suggested that the signs of improvement may mean that the stay-at-home order in place statewide is having an effect, adding that this is the time to double down on social distancing measures.

New York City hospitals have 5,500 ventilators with an additional 135 in an emergency reserve ready to be deployed where needed.

According to the mayor, the city still urgently needs additional surgical gowns. De Blasio said he asked the federal government for 9.2 million gowns.

The White House CCP virus task force has rushed personnel, equipment, and supplies to the city as the outbreak worsened throughout the month of March. The Army Corps of Engineers retrofitted a convention center into a 1,000-bed hospital. The Navy deployed a 1,000-bed hospital ship. At the request of Gov. Andrew Cuomo, President Donald Trump authorized for both hospitals to be used exclusively for COVID-19 patients.

New York State reported the largest daily CCP virus death toll for April 6, while other hospital metrics suggested that the state is nearing the peak of the outbreak. In neighboring New Jersey, the second-worst hit state nationwide, there were also signs that the outbreak is leveling off.