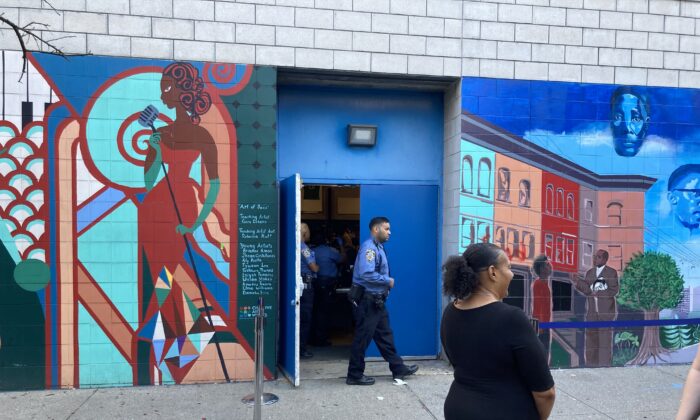 A heckler briefly interrupted a speech by New York City Mayor Eric Adams on July 11 before security closed in and escorted the man out.

Shortly after Adams began the panel discussion, a heckler started chanting something that could not be understood from across the room. Security quickly closed in on the man and escorted him out.

“This is who we are up against. People who want to spend time being disruptive,” Adams said of the heckler. “[Just] because you are the loudest, does not mean you are saying something,” he added.

Adams touted the 100,000 youth summer jobs that had been created—the most in New York City history.

“We did not just have our young people have a job, getting a paycheck at the end of the two weeks period,” Adams stated, explaining that youth would also be taught financial literacy, meditation, how to communicate with each other and how to travel around the city, emphasizing that they were being taught life skills.

“We are changing the model of education,” Adams said, mentioning how the trades are being undervalued and how some electricians can afford Porsche vehicles.

Adams also said that since January, they have taken 1,700 people out of living in the subway.

When questioned about gun and gang violence, Adams said the drivers of the violence were youth gangs and that by the time a youth has picked up a gun, “we have already lost him.”

“The driver of the violence we’re seeing now is really coming from the crews—the street crews. And there are many rivers that feed the sea of pirates. But we want intervention and prevention. . . We can’t lock our way out of this. We can’t lock people up and think that things are going to go away. . . Intervention is right now,” Adams said, and went on to explain the importance of dyslexia screening and how 30-40 percent of inmates are dyslexic.

This was the second of his community conversations, the first being held last week in Brooklyn. The mayor announced plans for a third such meeting, exclusively with youth.