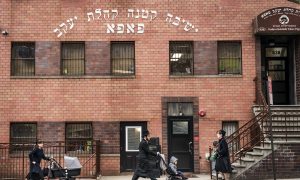 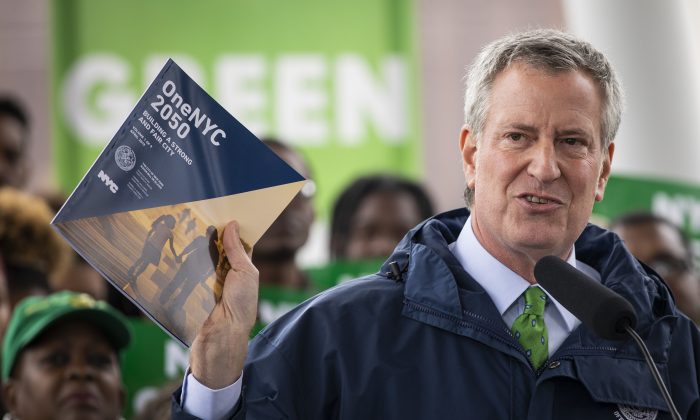 New York City Mayor Bill de Blasio holds up a copy of 'One NYC 2050' as he speaks at Hunters Point South Park in the Queens borough of New York City on April 22, 2019. (Drew Angerer/Getty Images)
2020 Election

De Blasio is the latest to launch a longshot bid in a crowded field of 2020 Democratic candidates. Two sources told the outlet his presidential campaign could start as early as his birthday on May 8, when he will turn 58 years old. De Blasio himself said on May 2 that he would announce this month if he was running.

“I have never run for anything without intending to win,” he said on May 2. “And you can look at my track record. I was an underdog in everything I’ve ever been near. I’m not saying that with any hubris. I think this is extraordinarily rich field and complex, dynamic, ever-changing.”

De Blasio, who has been described by The New York Times as “a young leftist” in his earlier days, recently launched his own version of the controversial “Green New Deal” that recently was presented to Congress. His progressive plan aims to cut emissions from the city’s high rises and “ban” the classic glass and steel skyscrapers that make up the Big Apple’s skyline.

“Mayor Bill de Blasio’s flirtation with a 2020 White House bid is prompting a rare moment of unity among New Yorkers. Three-quarters of them say, ‘Mr. Mayor: Don’t do it,'” said Mary Snow, a polling analyst for the Quinnipiac University Poll.

In March, the mayor of the Big Apple implemented a “Meatless Monday” school program that would provide students in the city’s 1,800 public schools an all-vegetarian breakfast and lunch menus every Monday, which he said would improve New Yorkers’ health and reduce their environmental impact on the planet.

In January, he announced a health care plan to cover an estimated 600,000 residents, including illegal immigrants. The mayor touted the program as a step toward universal health care.

De Blasio, in his 2019 State of the City speech, also touted the redistribution of wealth.

According to the Associated Press, de Blasio is running mainly to raise his profile and to secure a position in another Democrat’s administration.

“Bill de Blasio has had a fair amount of big, progressive achievements as mayor of New York City,” said Rebecca Katz, a former adviser who isn’t working on de Blasio’s possible presidential campaign. “I don’t want to get in his head too much, but my guess is he wants the world to see it, understand it, and thank him for it.”

De Blasio has traveled to key early voting primary states over the past few months in order to lay the groundwork for his campaign.