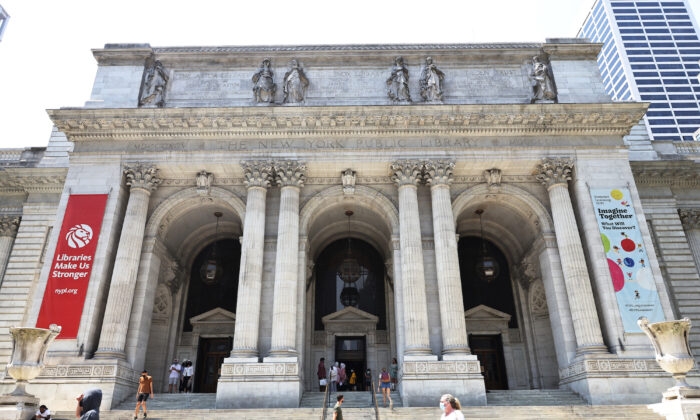 New York City’s libraries are offering young readers across the nation free online access to books that are deemed inappropriate by parents and have been pulled from school bookshelves.

For a limited time, four books are made available nationwide by New York Public Library (NYPL) on SimplyE, a mobile application for borrowing and reading e-books from libraries. The titles include “Speak” by Laurie Halse Anderson, “King and the Dragonflies” by Kacen Callender, “Stamped: Racism, Antiracism, and You” by Jason Reynolds and Ibram X. Kendi, and “Catcher in the Rye” by J.D. Salinger.

All four books have sparked controversy because of their content dealing with sex and race. “Speak,” which its critics say is akin to “soft pornography,” tells the story of a ninth-grade girl who refuses to talk after being raped at a party. “King and the Dragonflies” is about a black gay teenager struggling with his sexual and racial identity.

A book highly acclaimed among proponents of critical race theory, “Stamped” offers “ways readers can identify and stamp out racist thoughts in their daily lives.” Co-author Kendi is best known for advocating the concept of “antiracism,” the idea that there is no such thing as being non-racist or race-neutral, and that the only alternative to racism is to be “antiracist” by actively identifying and confronting perceived racism all the time, in every situation.

These books are now added to NYPL’s “Books For All” collection for a month, meaning that through the end of May, readers can read them on their mobile devices without having to have an NYPL library card or be a resident of New York state.

Anthony W. Marx, the president of NYPL, said this is a response to parents and lawmakers trying to remove from school libraries books they find inappropriate for children, an effort he called “censorship.”

“These recent instances of censorship and book banning are extremely disturbing and amount to an all-out attack on the very foundation of our democracy,” Marx said in a press release. “Since their inception, public libraries have worked to combat these forces simply by making all perspectives and ideas accessible to all, regardless of background or circumstance.”

The NYPL initiative comes after Brooklyn Public Library launched its own campaign to promote books with explicit sexual and racial themes for young readers.

The Brooklyn campaign, dubbed “Book Unbanned,” allows anyone aged 13 to 21 to apply for a free e-card to get access to the library’s collection of 350,000 e-books and 200,000 audio books. The new additions to the collection include “Gender Queer” by Maia Kobabe, “All Boys Aren’t Blue” by George M. Johnson, and “Lawn Boy” by Jonathan Evison.

All three books are focused on homosexuality and are most often removed from school districts across the country due to their sexually explicit material.

Linda E. Johnson, president and CEO of Brooklyn Public Library, says that the library “cannot sit idly by while books rejected by a few are removed from the library shelves for all.”

“Books UnBanned will act as an antidote to censorship, offering teens and young adults across the country unlimited access to our extensive collection of ebooks and audiobooks, including those which may be banned in their home libraries,” she said.