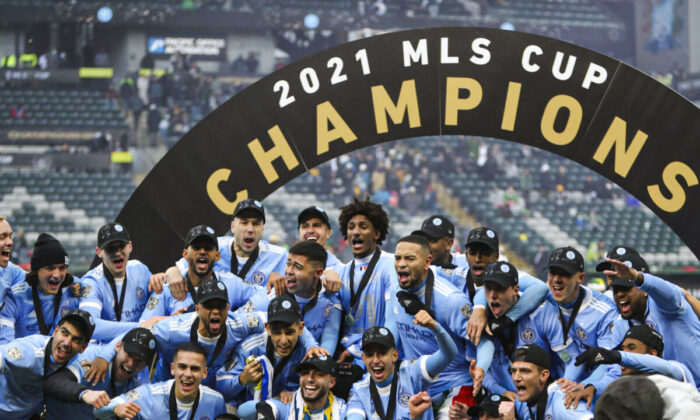 In a dramatic ending to the 26th season of MLS on Saturday, the New York City Football Club (NYC FC) controlled much of the match until the 94th minute, when the host Portland Timbers would equalize 1–1 to send the game to overtime.

NYC prevailed in the penalty shootout 4–2 through heroics by goalkeeper Sean Johnson, who stopped two penalties, setting the stage for their fourth shooter, Alexander Callens, to convert his shot and give NYC their first title in their seventh year in the MLS.

The atmosphere felt like a classic European winter match in the cold heavy rain of the Pacific Northwest at the 90-plus-year-old venue of Providence Park in Portland, Oregon, to a sold out crowd of 25,218, with 3,000 NYC fans who had made the journey to the West Coast.

The home crowd of the Portland Timbers, also known as “Timbers Army,” provided much of the energy throughout the match, with steady chants of “PT … FC.” Portland fans have been under harsh lockdowns due to COVID-19, and seemed eager to explode for joy as the club sought its second title, with the club having previously won in 2015.

NYC controlled 57 percent of the possession in the first half with their strategy, from coach Ronny Deila, of high pressure defense and quick passing.

Portland must be comfortable with this style as they had defeated NYC in five out of their six previous meetings, even though NYC maintained the majority of the possession. It evened out by the end of the match at 52–48 percent.

Around the 30 minute mark, NYC’s best play-maker, Maxi Morales, was limping from a calf injury but was never taken out. Being the smallest player in the league, he has led the MLS in assists since 2017.

The 39th minute would find the ailing Morales taking a free kick from about 35 yards out along the right side, sending it to the back left, past the goal about five yards out, to find the last player along the line, Valentin “Taty” Castellanos. Taty jumped high and was able to head the ball down through the outstretched hands of the diving goalkeeper Steve Clark, for a 1–0 lead. Taty is the reigning MLS Golden Boot winner for 2021.

During the celebration at the left corner, NYC’s Jesus Medina was hit by an apparent canned drink thrown by a fan, who was eventually thrown out of the premises.

The second half found more end-to-end action as Portland had to take more chances at goal and sent more players on the attack.

Portland would substitute for their aging superstar, Diego Valeri, in the 88th minute. He is the all-time league leader, scoring over 80 goals and 80 assists, playing in his final game in hopes of finding an equalizer.

It happened in the 94th minute, as Portland took a corner kick as keeper Clark pushed into the opponent’s goal for a possible header. The corner was cleared away and Clark, while retreating back to his goal, had to stretch to get a pass back to the right goal-line, and the Timbers regained possession.

The throw-in to the center ultimately found Claudio Bravo, who looped a high 15-yard pass to Diego Chara on the right flank. Chara headed a pass to the center of the box, where Timbers defender Larrys Mabiala flew in from the left attempting to head the ball, he knocking over two NYC defenders including center back Maxime Chanot.

The ball eventually fell in front of Jaroslaw Niezgoda, who took a left-footed side volley into the crowd of defenders. Fortunately, the rebound came perfectly to a waiting Felipe Mora, who scored on a first-time shot into the right corner of the goal.

The NYC players were enraged as there was no foul called on Mabiala, and NYC continued their complaints to the officials through the break before the start of overtime.

Portland was strong in the opening of the first half of overtime, as NYC played hesitantly, still in shock from the events that took away their apparent victory.

The game was still tied after 120 minutes, and would be decided on a penalty shootout.

NYC goalkeeper, Sean Johnson, was tremendous in stopping the first two penalty kicks with diving saves on low shots to his right; he would get the MVP.

Johnson’s saves set up defender Alexander Callens for NYC’s fourth penalty. Callens would blast the left-footed shot high to the right side into the goal, while Timbers goalkeeper Clark dove to the left, sealing the overtime championship win.

NYC coach Deila said of Johnson: “The way he has stepped up the last two months has been absolutely unbelievable. And for me, he’s the big, big winner. He wins us this game in the end. The way he speaks to the team, the way he goes in front every day in training, bringing people together, and also when the big moment is coming, how he is the standout time after time. He’s a winner, a real winner, and he’s a leader. He’s a captain that the whole club should be really, really proud of.”

Johnson credited the Timbers on an unbelievable game, but added, “I told the boys [after regulation] don’t put the heads down. There’s a lot of game left to be played, and they gave it everything today.”

“We said it before the penalty shootout, don’t look at it as a pressure situation,” added Johnson. “Embrace the moment and I wanted to stay in the present, and do what I could to help the team, and we stepped up in a big way. I was able to get a couple saves, and the boys buried the rest.”

Deila is ultimately responsible for taking the club to a championship win with his coaching strategy and management. Deila led Scotland’s Celtic to two championships in 2015 and 2016, and Stromsgodset to the 2010 Norwegian Cup and the 2013 League Title.

“If you keep believing, keep working hard and improve, you get what you deserve in the end,” said Deila. “And this team, what they have done, they deserve to win MLS this year, and they did it. I’m unbelievably proud and grateful to be a part of it.”