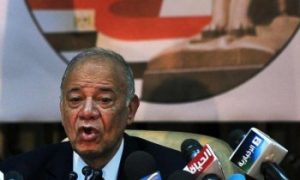 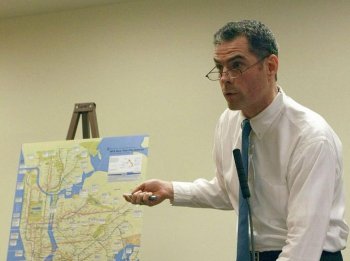 TALE OF TWO CITIES: Geoffrey Croft, president of New York City Park Advocates, called the distribution of Park Enforcement Patrol officers a 'tale of two cities,' as he went through different parks on the map and illustrated a disparate allotment of officers to each at a City Council hearing on Wednesday. (Tara MacIsaac/The Epoch Times)
US

By Tara MacIsaac
Print
NEW YORK—A City Council hearing convened on Wednesday to examine the distribution of Park Enforcement Patrol (PEP) officers across the five boroughs. Manhattan is the borough with the least amount of parkland, but the highest number of officers on patrol.

Manhattan's parks have the cash—and the safety patrol that comes with it. As crime rises in the city's parks and the number of patrolling officers decreases, Manhattan's privately managed parkland has plenty of officers on hand.

Outer boroughs are “getting the short end of the stick,” because they rely on public funds, said Councilwoman Julissa Ferreras of Queens. Private entities, such as Battery Park City Authority, Hudson River Park Trust, and Central Park Conservancy, are drawn to the “sexy” parks of Manhattan, as Councilwoman Melissa Mark-Viverito put it.

“Our communities are sexy, too. It's just that we're broke,” joked Ferreras.

Geoffrey Croft, president of New York City Park Advocates , a nonprofit watchdog group, called it a “tale of two cities.” He took the council members on a virtual tour of the city, passing through Battery Park City, where 35 PEP officers patrol 35 acres, and the Bronx, where 8 officers patrol 6,000 acres.

“We as a city are not doing enough,” said Mark-Viverito, who chairs the Committee on Parks and Recreation, adding that publicly managed parks should be just as safe as the privately managed ones.

According to Croft’s count, obtained on Thursday of last week, 40 publicly funded officers patrol 28,000 acres of parkland in New York City: seven in Queens, eight in the Bronx, seven in Brooklyn, five in Staten Island, and 13 in Manhattan.

Deputy Commissioner of Parks and Recreation Liam Kavanaugh provided a higher number, 92, which more than doubled Croft's count. Croft said Kavanaugh's numbers include officers stationed in recreation centers, as well as officers on vacation, sick leave, or otherwise occupied but not actually walking through the parks.

According to Croft's figures, 71 private officers are on patrol in Manhattan, seven in Brooklyn, and none in the other boroughs. This matched the numbers Kavanaugh gave at one point during the hearing, although he specified different figures at another time—and his office provided still different numbers after the meeting.

At one point, the deputy commissioner was asked to account for 209 sworn PEP officers. His figures totaled 149.

Kavanaugh said the private stewardship of parks is a great relief to the city, allowing the Department of Parks and Recreation to use its resources elsewhere.

Manhattan has half the parkland of any other borough, 102 NYPD officers at the Central Park Precinct, and a wealth of private PEP officers. However, more publicly funded officers are still allocated to the borough.

“Manhattan has the highest population density of any borough and the lowest per-capita parkland, and that creates much more regular use in the parks than we see in other boroughs. The day-time population increases to 4.2 million people, because of all the people who come to work here,” explained Kavanaugh. He also noted that 38 percent of the 311 calls related to parks come from Manhattan, and 45 percent of calls to the Parks Department relate to Manhattan parks.

Flushing Meadows in Queens spans more than 1,000 acres and has two officers on patrol. If anything happens in the park, it would be nearly impossible to find an officer, Ferreras said.

The city's parks saw a 24 percent increase in crime in 2010, noted Croft. Kavanaugh denied any rise in crime, but NYPD has confirmed an increase.

Croft countered that this year's budget includes 151 PEP officers at $11.3 million. Councilwoman Elizabeth Crowley added that she had attended the department's budget hearings and noted a specific number of PEP slots worked into the budget—a number that has been repeatedly higher than the actual officers on staff over the years.

“Unfortunately, we are unable to replace people who leave of their own volition,” replied Kavanaugh. He explained that the marked decrease in the number of officers over the years is a result of attrition and promotion, which, according to budgetary stipulations, the department cannot make up for with new hires.

The peak number of officers during Kavanaugh's three-term tenure was 157 in 2007, nearly twice the 92 publicly funded officers currently on duty. Croft pointed out that 450 PEP officers patrolled the city's parks in the mid-1990s.

Councilman James Vacca of the Bronx insisted that even as the department falls far short of the 151 PEP officers allotted by the budget, the budget should actually include even more officers. PEP is a revenue-generating entity, he pointed out.

Kavanaugh reported that PEP handed out approximately 8,300 summonses in 2010, from canine- and alcohol-related offenses to parking violations; the city collected $350,000. Vacca argued that if the city was more stringent in collecting its dues, it could afford to provide all boroughs and parks the kind of security enjoyed by the privately managed parks in Manhattan.