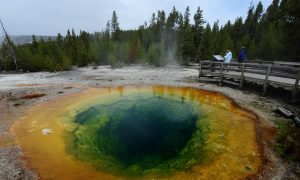 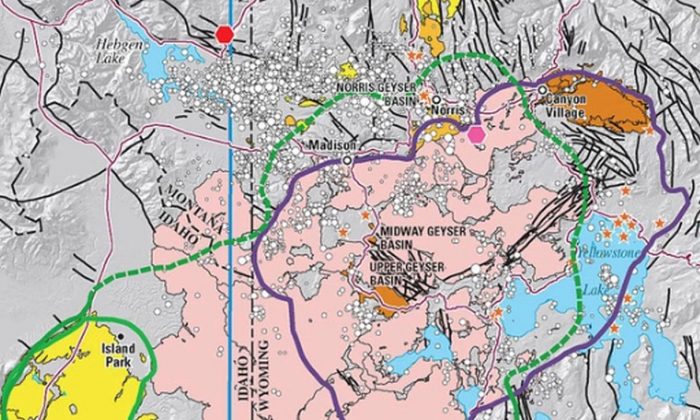 The eruption of a “supervolcano” beneath Yellowstone National Park would devastate the entire world, according to an opinion piece published in the New York Times on Aug. 21.

Bryan Walsh, an author of the book “End Times,” wrote that there are 20 supervolcanoes on Earth that represent the greatest threat to human life.

The Yellowstone one, he noted, has erupted three times in the past 2.1 million years, and the last one was about 640,000 years ago.

He theorized what would happen should the caldera erupt.

“First would come increasingly intense earthquakes, a sign that magma beneath Yellowstone was rushing toward the surface. Then magma would burst through the ground in a titanic eruption, discharging the toxic innards of the earth to the air. It would continue for days, burying Yellowstone in lava within a 40-mile radius,” Walsh said in the NY Times.

The “supereruption” would bury Wyoming, Utah, and Colorado in several feet of toxic volcanic ash. Likely, the ash would spread to the Midwest, he said.

“Crops would be destroyed; pastureland would be contaminated. Power lines and electrical transformers would be ruined, potentially knocking out much of the grid,” Walsh said.

But the effects would be felt across the world.

“Modeling by meteorologists has found that the aerosols released could spread globally if the eruption occurred during the summer. Over the short term, as the toxic cloud blocked sunlight, global average temperatures could plunge significantly—and not return to normal for several years. Rainfall would decline sharply,” he said.

He said the supervolcano, and others like it, represent an “ultra-catastrophe” that would lead to human extinction. Biological warfare and asteroids are other examples.

Walsh closed the piece in saying that humans have the power to prevent such disasters.

However, “because we remain confined to the brief human time horizons of our own experience, we treat them as unreal. In doing so, we leave ourselves vulnerable to what we can’t imagine,” he said.

Scientists said they have discovered new thermal activity in Yellowstone National Park in Wyoming that is about the size of four football fields.

Speaking with Wyoming Public Media in April, United States Geological Survey researcher Greg Vaughan said that the “area used to be covered by trees and now it’s an area where there’s a bunch of dead trees, bright soil and it’s a hot spot.”

He uses satellites to track thermal areas that measure heat being emitted from the ground.

The hot and corrosive hot spot has been “been sneaking up on the park for the last 20 years,” he told the New York Times.

“Yellowstone’s thermal areas are the surface expression of the deeper magmatic system, and they are always changing. They heat up, they cool down, and they can move around,” the Yellowstone Volcano Observatory stated, pointing to the eruption of Ear Spring in September 2018 as a “new thermal feature.”

“These sorts of changes are part of the normal life cycles of thermal areas in Yellowstone National Park,” it added in a blog post earlier this month.

More than 10,000 thermal features are located within the park.

Michael Poland, the researcher in charge of the Yellowstone Volcano Observatory, has often had to debunk articles saying the Yellowstone caldera, or “supervolcano,” is about to erupt. He told the newspaper that the appearance of a new thermal area isn’t something to worry about, noting that thermal areas appear and disappear in the park.