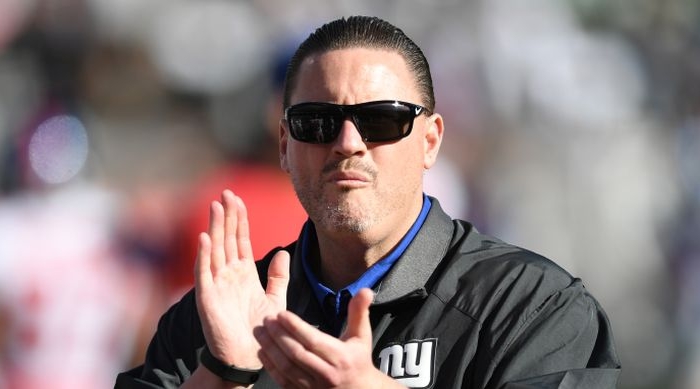 Head coach Ben McAdoo of the New York Giants looks on during warm ups prior to their NFL game against the Oakland Raiders at Oakland-Alameda County Coliseum on December 3, 2017 in Oakland, California. (Photo by Thearon W. Henderson/Getty Images)
Entertainment News

The New York Giants fired second-year head coach Ben McAdoo in a housecleaning on Monday morning, less than a week after the benching of quarterback Eli Manning created a backlash from fans.

The Giants also fired general manager Jerry Reese, who becomes the first GM known to be let go in-season by the team.

McAdoo is the first Giants head coach to be relieved of his duties in-season since 1976 when Bill Arnsparger was fired.

The firing ends a tumultuous week as the 2-10 Giants are going through one of the worst seasons in franchise history. After Sunday’s 24-17 loss to the Oakland Raiders, the Giants are tied for the second-worst record in the NFL.

McAdoo made the playoffs in his first season last year after the former offensive coordinator took over for Tom Coughlin. In 2016, the Giants had an 11-5 record and ended a five-year playoff drought.

McAdoo’s decision last week to bench Manning led to his firing and may take the heat off of Giants owner John Mara, who reportedly was not happy with how the coach presented the plan to the franchise’s two-time Super Bowl MVP quarterback.

Manning, who started 210 straight games for the Giants, fought back tears last Tuesday as he talked about the stunning decision by McAdoo to name Geno Smith the starting quarterback for Sunday’s game.

The Giants finish with three of their final four games at home — Dallas on Dec. 10, Philadelphia on Dec. 17 and Washington on Dec. 31. The Giants also play at Arizona on Dec. 24.