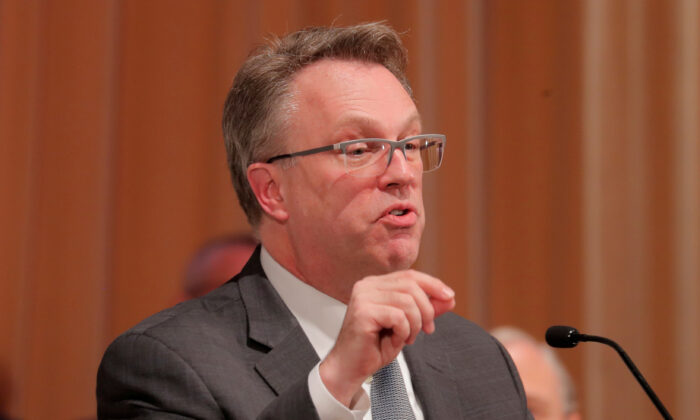 John C. Williams, president of the Federal Reserve Bank of New York and vice chair of the rate-setting Federal Open Market Committee (FOMC), said the central bank is approaching a decision on whether to raise its short-term interest rates from near zero.

Williams said the current signs of a strong labor market and rising inflation are prime factors on when to implement changes.

“Given the clear signs of a very strong labor market, we are approaching a decision to get that process underway,” Williams said, regarding raising short-term borrowing costs.

A further combination of strong demand for goods and supply bottlenecks has pushed inflation up to “considerably high” levels, he said.

“The next step in reducing monetary accommodation to the economy will be to gradually bring the target range for the federal funds rate from its current, very low level back to more normal levels,” Williams said at a virtual event hosted by the Council on Foreign Relations on Jan. 14.

“The circumstances we are facing today are unlike anything we’ve experienced in the past,” he said, referring to the pandemic.

The central bank president said that businesses may take a hit in the short term, with many still struggling to find workers and as consumers continue to avoid shopping in person.

The labor market is expected to improve this year as the U.S. economy recovers, with a growth rate of 3.5 percent and a respective 0.4 percent drop from 3.9 percent in the unemployment rate, Williams said.

He declined to comment on when the Fed would consider raising the near-zero short-term interest rates, but said that “the timing of such decisions will be based on a careful consideration of a wide range of data and information, with a clear eye on our maximum employment and price stability goals.”

The Fed has been struggling with an extended surge in inflation that has been worse than expected and is moving its monetary policies into a position to help bring inflation toward its 2 percent target.

Williams voiced confidence that the U.S. economy could handle the changes in the Fed’s planned policies.

He expects inflation to stabilize by the end of the year as growth slows and supply constraints are resolved, with inflation ebbing to 2.5 percent this year and closer to 2 percent in 2023.

Other Fed officials throughout the week have publicly commented on the need for easing back on central bank aid for the economy.

San Francisco Fed President Mary Daly, at a separate event hosted by The New York Times, said officials are “going to have to adjust policy,” as there are currently few signs that inflation, which is at its highest rate since June 1982, will be able to remedy itself.

In the last scheduled words from Fed policymakers ahead of the Jan. 25–26 meeting of the FOMC, Federal Reserve Chairman Jerome Powell and Fed Vice Chair nominee Lael Brainard both emphasized that the high inflation must be brought back under control.

Fed officials are expected to debate strategies for raising interest rates and reducing more than $8 trillion in bond holdings when they meet again in two weeks.

In December, the FOMC sped up the pace of reducing bond purchases, with an eye toward ending that stimulus in March.

The central bank may raise rates when it concludes its bond purchasing program in mid-March, said Brainard.

Other central bank officials have said this week that a March rate increase is on the table, to be followed by a series of interest rate increases over the course of the year.

“The economy is in a great place in terms of where we are now—in terms of employment and GDP—and it makes sense for monetary policy to evolve as the economy has,” Williams said.

“We’re actually in a good position to do that in a way that isn’t disruptive.”