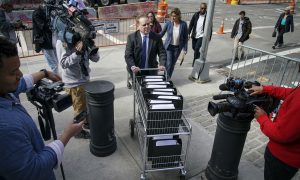 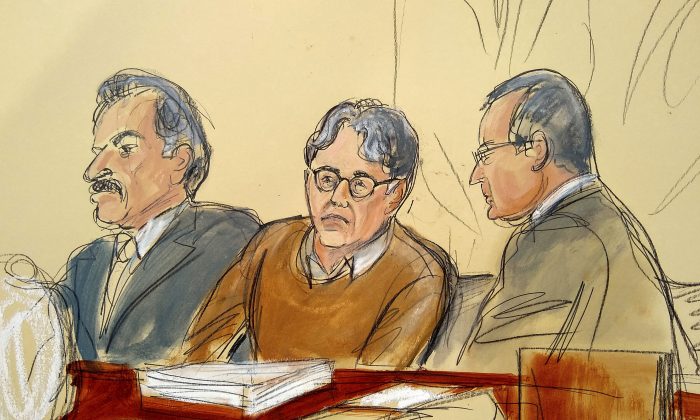 Defendant Keith Raniere (C) leader of sex cult NXIVM, is seated between his attorneys Paul Der Ohannesian (L) and Marc Agnifilo, during the first day of his sex trafficking trial, in this May 7, 2019, courtroom sketch. (Elizabeth Williams via AP, File)
US News

NEW YORK—Keith Raniere, the former leader of the group NXIVM, was found guilty on all charges at a Brooklyn federal court on June 19.

A federal jury, made up of eight men and four women, deliberated for less than five hours before finding Raniere guilty of all 7 criminal counts including sex trafficking, forced labor conspiracy, and racketeering.

Raniere listened attentively but showed no visible reaction as he learned the verdict. His sentencing is scheduled for Sept. 25.

The accusations against Raniere center around a secret society within the group—which he allegedly created in 2015—named DOS, an acronym for the Latin “dominus obsequious sororium,” loosely translated as “master of the slave women.”

Prosecutors say Raniere was the “highest master” of DOS and forced other members—all women—to have sex with him. Many of the DOS members were branded with a cauterizing pen while naked and being filmed.

Days ago, during closing arguments in the high-profile trial, assistant U.S. Attorney Moira Penza alluded to the prosecution’s May 7 opening statements, telling the jury that Raniere was chiefly after “sex, money, power.”

Penza brought up the testimony of former NXIVM members, including one identified by prosecutors as “Daniela,” who had spoken about being locked up in a room for nearly two years after Raniere found out she had kissed another man. Another member, identified as Sylvie, testified about being forced into a sex act with the leader. Another, a senior board member, detailed Raniere’s manipulation and fraud.

The verdict comes after a 7-week long trial. Raniere could face a maximum sentence of life in prison.

During the prosecution’s closing arguments, Penza detailed the crimes committed by Raniere over a 15-year period.  The organization was founded by him in 1998.

“Even though his community members considered him a humanitarian, leader, mentor, and guru, you saw him for what he was: a con-man, a predator, and a crime boss,” Penza previously told jurors on June 17.

Penza also brought up added child pornography charges against Raniere, who had photos stored on a hard drive. She also said previously Raniere turned “victims into victimizers,” as the five other co-defendants in the case have all pleaded guilty.

“The evidence is overwhelming that [the girl] was under 18 when the naked pictures were taken,” Penza had told the court.

NXIVM presented itself to the public as a company with noble goals: offering self-help courses to those seeking to improve their lives both personally and professionally. At least 17,000 people had enrolled in the classes throughout the group’s history.

The content of the group’s classes, all transcribed from Raniere’s speeches, was presented as the core of the NXIVM’s curriculum. A 12-point “mission statement” penned by him shaped much of the philosophy behind the organization. It contained guidelines students were told to recite, such as “I will not choose to be a victim,” as well as the directive to keep information related to the organization confidential.

The classes served as a “hunting ground” of sorts for Raniere to use in scoping out women, former NXIVM member Susan Dones told The Epoch Times previously.

“Keith used it for women he sexually desired,” Dones said. “They also used it as a financial hunting ground for people who had assets. They used it for free labor.”

The master-slave society known as DOS employed a pyramid structure involving levels of “slaves” headed by “masters”; slaves were then expected to recruit their own slaves, thus becoming masters themselves. Raniere was the “highest master” of DOS and made other members—all women—have sex with him.

In DOS, directly under Raniere were six so-called “first-line masters,” who were slaves only to him. Those in the first line, which would be equivalent to the second tier in a pyramid scheme, had to recruit six more women each as their own slaves. Then each of those six would then recruit their own slaves as well.

DOS members were allegedly recruited on the condition that they would give up personal, often embarrassing information about themselves, including compromising images or videos, as “collateral.” Once inside, members were regularly required to provide additional collateral to ensure that they kept the group’s activities secret.

“There was no [monetary] cost in DOS, but it was still a pyramid scheme—the payment was in slavery,” NXIVM’s ex-publicist-turned-whistleblower, Frank Parlato, told The Epoch Times previously. “Raniere created the world’s first blackmail and branding pyramid scheme.”

The Epoch Times previously explored Raniere’s childhood through interviews with some of his former classmates, who revealed how his moral descent could have stemmed from a deep resentment of girls and women he developed after experiencing rejection in his youth. This apparent hatred of the opposite sex, coupled with a need to be adored, hinted at what he would later become.