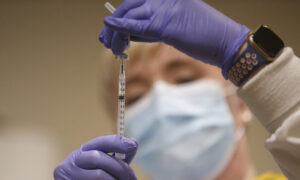 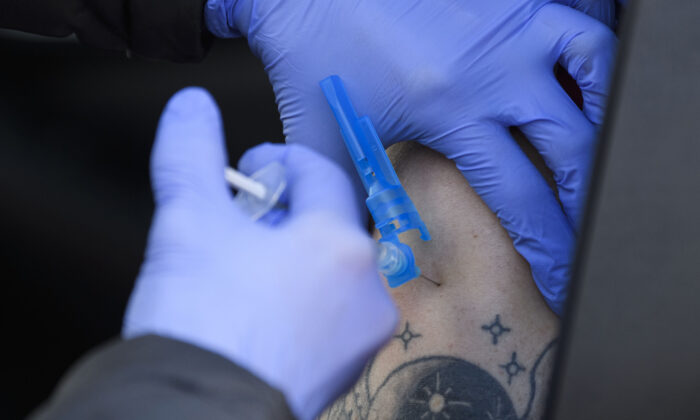 A registered nurse administers the Pfizer-BioNTech COVID-19 vaccine to a healthcare worker in Reno, Nev., on Dec. 17, 2020. (Patrick T. Fallon/AFP via Getty Images)
US News

Nurse Faints After Getting COVID-19 Vaccine

A nurse in Tennessee on Thursday fainted after getting the new COVID-19 vaccine.

Tiffany Dover, a nurse manager at CHI Memorial Hospital in Chattanooga, fainted while speaking to reporters shortly after getting vaccinated.

A doctor who was standing nearby caught her.

As she was on the floor surrounded by medical staff, they blocked a camera that was streaming.

“It just hit me all of the sudden, I could feel it coming on. I felt a little disoriented but I feel fine now, and the pain in my arm is gone,” said Dover.

Dr. Jesse Tucker, medical director of critical care medicine at the hospital, told the broadcaster that fainting “is a reaction that can happen very frequently with any vaccine or shot.”

“No reason to suspect that that’s due to the vaccine whatsoever,” he added.

The hospital posted a short video clip of a doctor being vaccinated on its Facebook page. It did not post any media or a statement about the nurse fainting.

A hospital spokeswoman told The Epoch Times via email that the nurse “never lost consciousness and quickly recovered.”

According to the Centers for Disease Control and Prevention, fainting can be triggered by many types of medical procedures, including vaccinations.

“Fainting, also called syncope, is a temporary loss of consciousness caused by a decreased blood flow to the brain. Although fainting has a variety of possible causes, it is usually triggered by pain or anxiety. Sometimes people faint after vaccination. People who faint might fall and injure themselves if they are not sitting or lying down at the time that they lose consciousness. Sometimes when people faint, their muscles twitch and their bodies make jerking movements; this can sometimes be confused with seizures but are not actual seizures,” the agency states on its website.

While hundreds of workers in the United States received the new COVID-19 vaccine this week with no problems, one appeared to not actually be injected and two others suffered allergic reactions.

One of them, a middle-aged woman, experienced an increased heartbeat and shortness of breath, the Bartlett Regional Hospital in Juneau, Alaska, said.

The woman was admitted to the hospital, given Benadryl, and put on an intravenous epinephrine drip, a medication that can treat allergic reactions.

Late Thursday, the hospital said the staff member is still recovering and would spend another night under observation.

The second staffer experienced eye puffiness, lightheadedness, and scratchy throat ten minutes after being injected with the vaccine. He was taken to the emergency department and administered epinephrine, Pepcid, and Benadryl. He felt completely back to normal within an hour and was released.

According to the hospital, both workers are still encouraging their colleagues to get the vaccine.

Vice President Mike Pence, Second Lady Karen Pence, and Surgeon General Jerome Adams are slated to get vaccinated during a live event on Friday morning. The White House said the effort is meant “to promote the safety and efficacy of the vaccine and build confidence among the American people.”

People with certain allergies were warned earlier this month not to get the new vaccine.

“Our conditions for use, is what we call them, specifically states that, if you have an allergy to any component of the Pfizer/BioNTech vaccine, you should not receive it,” Dr. Stephen Hahn, commissioner of the Food and Drug Administration (FDA), said during a TV appearance.

Two people fell ill after getting the vaccine in the United Kingdom, prompting authorities to advise that people “with a significant history of allergic reactions do not receive this vaccination.”