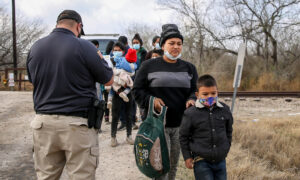 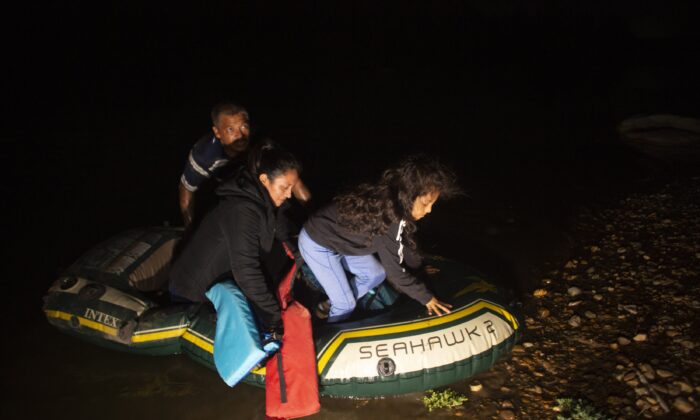 Kaylee Samantha, 7, who said she came alone from Mexico, gets off of a small inflatable raft onto U.S. soil after being delivered by a smuggler in Roma, Texas, on March 24, 2021. (Dario Lopez-Mills/AP Photo)
Immigration & Border Security

Number of Young Illegal Immigrants in US Custody Grows

The number of immigrant children in U.S. custody grew by over 1,500 in just two days, according to newly released federal data.

Just over 18,000 minors who illegally crossed the southern border of the United States without a parent or guardian were in the custody of Customs and Border Protection (CBP) or the Department of Health and Human Services (HHS), as of March 25.

Roughly 5,500 were in CBP custody. That’s where children go initially after being apprehended, before being transferred to HHS.

America is dealing with a surge in illegal border crossings, as well as a sharp increase in the number of young immigrants arriving without responsible adults. Experts have told The Epoch Times that the rise is due to President Joe Biden rolling back key Trump-era policies, such as stopping the policy of sending unaccompanied minors back to their home countries.

“It’s driven by Biden’s rhetoric, his rollback of Trump administration restrictions at the border,” Andrew Arthur, resident fellow in law and policy for the Center for Immigration Studies, told The Epoch Times earlier this month.

“I think the real question is, why are they doing this?” added James Carafano, vice president of the Heritage Foundation’s Kathryn and Shelby Cullom Davis Institute, in a recent interview. “And you could argue it’s actually a deliberate policy that they’re actually seeking to attract illegal aliens into the United States.”

To deal with the influx in minors, the administration has reached deals to convert three convention centers into holding facilities and opened at least five other locations to house the aliens.

The 12,551 children in HHS care is the most since June 2019, the tail end of another surge. The number dipped as low as 834 last year, after the Trump administration utilized Title 42 to expel the majority of immigrants because they might be carrying the CCP (Chinese Communist Party) virus, which causes COVID-19.

Under U.S. law, CBP is supposed to transfer immigrant children to HHS within 72 hours of their apprehension.

Rep. Henry Cuellar (D-Texas) said Friday during an MSNBC appearance that he’s been told some young girls have been at the CBP’s Donna, Texas, holding facility for more than 20 days.

“I asked HHS why, and they said ‘well, we just don’t have the capacity now to take the young girls.’ They take, for example, in Carrizo Springs, young boys from ages 13 and 17,” he said. “They are scrambling at HHS to find a place, a center, so they can take the young girls there.”

White House officials have repeatedly said that immigrants shouldn’t travel to the border but insisted that their policy of not fully utilizing Title 42 powers is more humane than that of the previous administration.

Biden’s “focus is on moving these kids out of these Border Patrol facilities and making sure it’s done in a way that keeps them safe and keeps everyone safe,” White House press secretary Jen Psaki told reporters in Washington Friday.