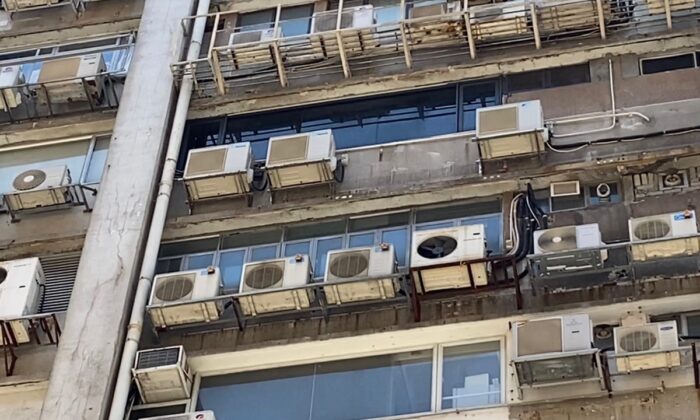 Land in Hong Kong is an extremely scarce and precious commodity. With also a high demand for housing, it has always been in short supply. The Hong Kong Society for Community Organisations (SoCO) estimates that there are more than 220,000 people living in all sorts of “cage homes,” “cubicle apartments,” “partitioned flats,” and the like.

However, that figure has not covered factory buildings and other non-residential units that are converted illegally for residential purposes. While there are no exact figures on the latter, it puts its estimate at around 12,000 as those staying in these “unliveable” units in industrial buildings in Hong Kong.

Self-employed driver Mr. Wu is one of them. With a monthly income of about HK$15,000 (US$1,915), he himself, his wife, and their two daughters, who are Form Four and Primary Six students respectively, rented a unit of about 100 square feet in San Po Kong, five or six years ago. “Each morning when I took them to school, we sometimes seemed not able to figure out which door was the correct exit. I seemed to be a stranger there, a thief looking for the escape route after stealing something, in the most scrupulous manner to avoid being caught,” he joked.

He believed that in the long run, it would be no good for the children’s integrity and conscience, so he decided to let the mother and daughters rent another 60-square-foot partitioned unit in the same area, while he continued to stay in the industrial building.

In doing so he had to pay a combined total of HK$7,000 (US$894) in monthly rent. “That was still cheaper than the ten thousand plus dollars if the four of us stayed together in one residential partitioned unit,” added Mr. Wu.

Various Reasons for Living There

Between July 2021 and July 2022, SoCO continuously interviewed and followed up with 139 tenants who rented partitioned units, cubicle rooms, bunkers, and rooftop apartments in Kwun Tong and Tsuen Wan industrial buildings to understand why they rented there. The results showed that 82.2 percent of the interviewees worked part-time or had casual jobs, and the median household income was only HK$9,166 (US$1,170), which was 30 percent lower than that of the tenants in partitioned units in residential buildings. In terms of rent, industrial buildings are 40 percent lower than residential partitioned units, making them much more affordable for low-income groups.

About 94.9 percent of the respondents indicated that they stayed in industrial buildings because of the cheaper rents. Others, in descending order, were the convenience of going to work (13.8 percent), the availability of elevators (10.1 percent), the size of the units being larger than residential buildings or office buildings (8 percent), and the need to move out due to family problems (5 percent), work or hobby needs (2.9%), or being too crowded at the family home (2.2 percent). The longest time one had been renting an industrial building was 11 years, with about ten percent over five years. Before renting their current habitats, 42.1 percent also lived in another industrial building, reflecting that many of them were habitual renters, who are just “moving from one industrial building to another.” These are the people who are most unlikely to return to the residential rental market anytime soon.

Most of those interviewed were middle-aged and elderly people in the 51-60 age group and living alone. That accounted for 53.3 percent, and most of them were males (37 percent). Most of all renters (95.2 percent) said that the rent in the residential market was too high, and they did not have enough income to allow them to move out. Almost sixty percent (58.3 percent) had not applied for public housing because they had no idea how to do that (77.1 percent).

Special Care in Behaviour Needed While Living There

Among the industrial building residents interviewed, the most staggering one was “40 sub-units from one original unit,” resulting in a per capita area of just 40 square feet, and one bathroom shared by six people. In the absence of building corporations and social service organisations, it was extremely difficult for industrial building tenants to receive information.

To avoid government inspections, even if social workers took the initiative to come to interview them, it was still difficult to contact them. The survey found that 40.6 percent of them expressed the continual fear of losing their dwelling (from officer visits). That had put tremendous psychological pressure on them. To avoid being caught they had to act very carefully in their daily routines.

In the worst case when residents need to move out of their illegal residences in industrial buildings due to the law enforcement actions by the Buildings Department (BD), they can apply for the relocation allowance under the current Community Care Fund programme.

The SoCO believes that one of the reasons for the low number of applications is the low ceiling on incomes. Taking one and two-person households as an example, the programme puts respective monthly income ceilings of HK$10,000 (US$1,277) and HK$15,975 (US$ 2,040), which are lower than the income qualification for public housing applications.

In the event their application is successful, the tenants also need to notify the Buildings Department to come to confirm before moving out. If they move out in a hurry without doing that, they are not allowed to complete the application afterward.