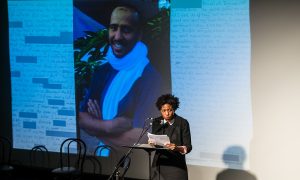 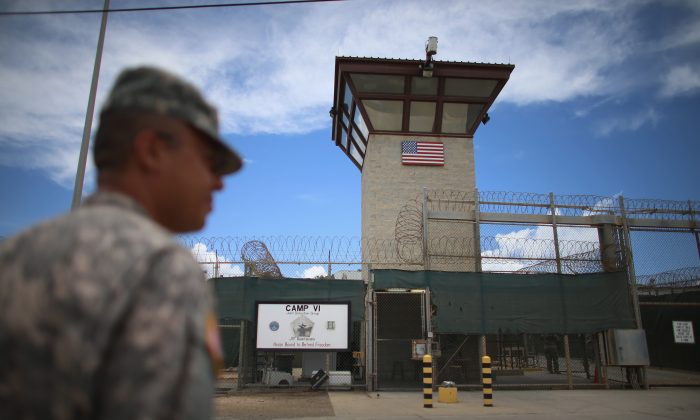 A military officer stands guard near the entrance to Camp VI at the Guantánamo Bay Naval Base in Cuba on March 30, 2013. (Joe Raedle/Getty Images)
US

Will President Obama defy Congress and close the detention center at Guantánamo by executive order?
By Gary Feuerberg
biggersmaller
Print

WASHINGTON—At President Obama’s State of the Union address on Jan. 12, he reiterated his intention to close the detention facilities at Guantánamo Bay Naval Base, where 91 still remain out of a population that reached at one time 779 in the Bush administration.

“That is why I will keep working to shut down the prison at Guantánamo. It’s expensive, it’s unnecessary, and it only serves as a recruitment brochure for our enemies. There’s a better way,” the president said.

White House Chief of Staff Denis McDonough said on Fox News on Jan. 10 that President Obama will close the facility.

The Washington Times described him as “one of al Qaeda’s most skilled explosives experts, a man personally praised by Osama bin Laden and who created the shoe-bomb design that was used unsuccessfully to bring down an airliner in 2001.”

Nevertheless, his release had been recommended back in 2007. Sawah was a “highly prolific source and has provided invaluable intelligence,” according to the AFP, citing his 2008 prison file, which also said he was “morbidly obese with elevated cholesterol, diabetes, nonalcoholic fatty liver disease, and chronic low back pain with sciatica.”

The law requires that for a detainee to be released, he must be transferred to a country that accepts him and enters some kind of reintegration or rehabilitation program. The law states that the secretary of defense will “substantially mitigate any risk the individual could attempt to re-engage in terrorist activity or otherwise threaten the United States or its allies.”

President Obama made the promise to shut down Guantánamo two days after his inauguration in his first term by issuing an executive order on Jan. 22, 2009. After seven years it’s still not done. He was soon challenged by Congress, which would not appropriate funding he requested to house the detainees to move them to the mainland.

For those who have covered the story closely and support the shutdown, the recent flood of releases with more in the queue to come are hopeful signs that it will really happen. One reason for their hopes is that if Mr. Obama cares about his legacy, which he probably does, he is going to want to do it, said Andy Worthington, journalist and blogger, and co-founder of the advocacy group Close Guantánamo and author of “The Guantánamo Files: The Stories of the 774 Detainees in America’s Illegal Prison.”

Worthington spoke on a panel at New America, Jan. 11—exactly to the day marking the 14th anniversary when the prison at Guantánamo Bay was opened in 2002.

But for the president to close the detention center by executive order and move the remaining prisoners, who cannot be transferred, to the United States would be in direct defiance of Congress. Congress bars the president from bringing detainees to the mainland for trials as well. It also bars transferring detainees to Somalia, Libya, Syria, and Yemen.

On Nov. 25, Congress passed, and the president had little choice but to sign, the National Defense Authorization Act of 2016, which contains language against building or modifying detention facilities in the United States, and requires certification signed by the secretary of defense that steps have been taken to ensure that the released detainees will not be allowed to re-engage in terrorist activities when transferred to other countries. The law also “prohibits the use of funds to transfer or release detainees at Guantánamo to or within the United States, its territories, or possessions.”

Of the 653 detainees who have been transferred in the Bush and Obama administrations, 117, or 18 percent, have been confirmed of re-engaging [in terrorist activities].
— Director of National Intelligence, July 2015

The administration’s plans to use maximum security federal prison facilities in the United States have been met with cries by the congressional lawmakers, in whose district the facilities reside, of threats to public security. Nevertheless, the Pentagon has scoped out federal prisons in Colorado, Kansas, and South Carolina, and submitted options for the president to consider, according to AFP.

Today, 32 of the 91 Guantánamo detainees can leave provided there is a country that will take them. The vast majority of these were approved by the interagency Guantánamo Review Task Force that President Obama established when he took office in 2009. Before the 10 Yemenites mentioned above were released, 35 detainees were approved for release six years ago. Worthington said it was “disgraceful,” and, “clearly, it’s a shame for everyone responsible that they’re still held.”

Ten are awaiting trials, or sentencing, or have been convicted. The remaining 49 detainees are where the holdup is. They are dubbed “forever prisoners.” They are considered too dangerous to release, but there is insufficient evidence to charge them or put them on trial.

Their status could change if the Periodical Review Board, commonly called the PRB, assesses whether the detainee poses a “continuing significant threat to the security of the United States.” Further, “The PRB may also consider diplomatic considerations or security assurances related to the detainee’s potential transfer, the detainee’s mental and physical health, and other relevant information,” states the law.

The PRB is made up of officials from the departments of Defense, Homeland Security, Justice and State, as well as the Joint Staff and the Office of the Director of National Intelligence. The PRB does not decide on the legality of the detentions.

The problem has been that the PRB moves at glacial speed. Established by President Obama by executive order on March 7, 2011, it took two years before it heard its first case. Of the 18 detainees it has reviewed, 15, or 83 percent were eligible for release. At this pace, “Obama will be long gone,” by the time the PRB reviews all 49, said Worthington.

Their status [of 49 detainees] is that they are too dangerous to release, but there is insufficient evidence to charge them or put them on trial.

President Obama has said that indefinite detention is abhorrent. At the April 30, 2013, news conference, the president said, “I mean, the notion that we’re going to continue to keep over a hundred individuals in a no man’s land in perpetuity … the idea that we would still maintain forever a group of individuals who have not been tried, that is contrary to who we are, it is contrary to our interests, and it needs to stop.”

The main concern of those who want to keep the detainees, even indefinitely, at Guantánamo is that once freed, they will re-engage in terrorist or insurgent activities, such as planning or conducting a terrorist act, conducting a suicide bombing, financing and recruiting terrorist operations, and so on.

That fear has merit. The Director of National Intelligence (DNI) states that as of July 2015, of the 653 detainees who have been transferred in the Bush and Obama administrations, 117, or 18 percent, have been confirmed of re-engaging, and 79, or 12 percent, are suspected of re-engaging.

‘Worst of the Worst’

During the Bush administration, the inmate population was reduced by over 500. At the beginning, the persons sent to Guantánamo were low-level “foot soldiers” or picked up from the bounties paid—as much as $5,000, according to Dr. Karen Greenberg, director of the Center on National Security at Fordham University, and the author of “The Least Worst Place: Guantánamo’s First 100 Days.” They were given no hearing before sent to Guantánamo.

The idea that we would still maintain forever a group of individuals who have not been tried, that is contrary to who we are … and needs to stop.
— President Barack Obama, news conference, April 30, 2013

Col. Lawrence B. Wilkerson (Ret.), who was chief of staff to Secretary of State Colin Powell, gave a deposition on behalf of one of the Guantánamo defendants in which he testified that “many of the prisoners detained at Guantánamo had been taken into custody without regard to whether they were truly enemy combatants, or in fact whether many of them were enemies at all.”

Wilkerson asserted that “of the initial 742 detainees that had arrived at Guantánamo, the majority of them had never seen a U.S. soldier in the process of their initial detention and their captivity had not been subjected to any meaningful review. Sometimes children as young as 12 and 13 and elderly as old as 92 or 93 had been shipped to Guantánamo.”

This all changed when in 2006, high-valued detainees were shipped to Guantánamo Bay. Khalid Sheik Mohammed, allegedly the mastermind of the Sept. 11 attacks, and Abd al-Rahim al Nashiri, who was convicted for the 2000 bombing of the USS Cole in Yemen, were transferred to Guantánamo. A dozen other high-value terrorists held by the CIA came along, according to The Washington Post.

Now the authorities could justify holding detainees for their information value, and the label “worst of the worst” really did apply, said Greenberg.

In a Dec. 8 presentation at the Heritage Foundation, Sen. Tom Cotton (R-Ark.) said that the current detainees are the worst of the worst, and moving these violent terrorists to U.S. prisons would endanger Americans, and could even radicalize their fellow inmates.

As the number of detainees dwindles, the president will undoubtedly be tempted to close Guantánamo and move the remaining few detainees who can’t be transferred to other countries to prisons on the mainland.

Gregory B. Craig, who was White House counsel in 2009, and Cliff Sloan, special envoy for Guantánamo closure in 2013 and 2014, wrote in an opinion piece in The New York Times, Nov. 6, 2015, that as commander in chief, the president has the exclusive authority to make tactical military decisions and Congress cannot interfere.

“The determination on where to hold detainees is a tactical judgment at the very core of the president’s role as commander in chief, equivalent to decisions on the disposition of troops and the use of equipment.” They argue that Congress cannot tell the president where military detainees must be held.

Opposing legal opinions say that Congress was given its appropriation power as a check on executive power. For example, it was used by Congress to bring the Vietnam War to an end.