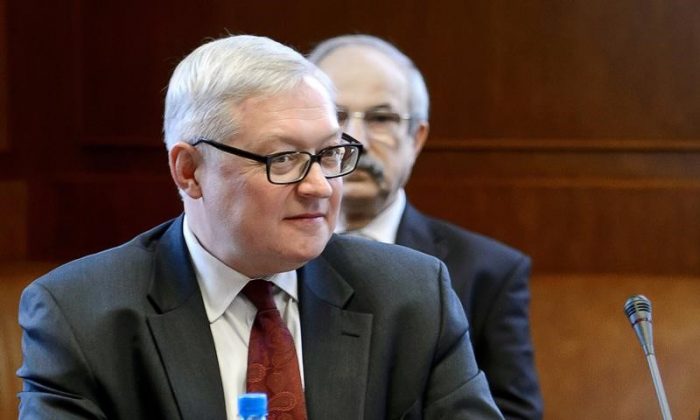 Nuclear Missiles Could Be Moved to Europe Absent a NATO Pullback: Russian Official

Citing the resurrection of a U.S. Cold War-era military command in Europe and NATO’s plans to counter the missile threat from Russia, a Russian official said this week that his country would respond in kind—alluding to the deployment of nuclear-capable missiles into Europe.

“The closer such systems appear to our borders, the higher the risks of destabilization, the more definite the contours of a new crisis, which, in fact, can be comparable in its degree of danger to the ‘Caribbean crisis’ [Cuban missile crisis],” Deputy Foreign Minister Sergei Ryabkov told RIA Novosti, the Russian state-owned news agency.

“Lack of progress toward a politico-diplomatic solution to this problem will lead to the fact that our response will be military and military-technical. That is, it will be a confrontation. It will be the next round. It will be the emergence of such means on our part.”

Ryabkov said the alternative to this escalation would be a legally binding pullback of NATO long-range weapons and other activities from near Russian borders.

On Nov. 8, the U.S. Army reactivated the 56th Artillery Command in Europe, which last served on active duty from 1986 to 1991 and was responsible for nuclear-capable Pershing ballistic missiles.

The command was inactivated in 1991 in conformity with the Intermediate-Range Nuclear Forces Treaty (INF), which sought to limit the types of weapons pursued by the United States and the Soviet Union (and then Russia). The United States pulled out of the treaty in 2019, citing Russian violations.

Being free of the treaty, the United States reactivated the command, enabling it to deploy long-range weapons in Europe.

“It will further enable the synchronization of joint and multinational fires and effects, and employment of future long-range surface to surface fires across the U.S. Army Europe and Africa area of responsibility,” Maj. Gen. Stephen J. Maranian, commander of the 56th Artillery Command, said in Nov. 3 press release.

Military news site Military.com reported that the command’s mission would be non-nuclear in nature.

“We have no intentions of deploying nuclear-capable missiles in Europe,” NATO Secretary-General Jens Stoltenberg said, speaking about Russia in late November. “But of course, we need to respond when we see Russia constantly violating arms control agreements that led to the demise of, for instance, the INF Treaty that banned all intermediate-range weapon systems, when they test and deploy new advanced nuclear-capable systems.

“Then, of course, we need to make sure that we continue to have credible deterrence and defense in a changed security environment.”

The United States already has nuclear weapons stored in Europe, which aren’t armed and would need to be delivered by aircraft, according to the Center for Arms Control and Non-Proliferation.

Ryabkov’s comments to RIA Novosti, published on Dec. 13, were well noticed by media outlets. However, he also interviewed with Russian newspaper Izvestia on the same day and provided additional insight into Russia’s perspective.

When asked if red lines could be marked jointly with the United States, Ryabkov said it was “inherently impossible” due to “such a wide gap in our approaches to international affairs and priorities in the so-called Euro-Atlantic.”

But Ryabkov said that despite these obstacles, Washington and Moscow do agree on one crucial thing.

“There is only one red line we have marked jointly, which is very good,” he said. “I am referring to the unacceptability of a nuclear war.”

Tensions between Russia and NATO have increased recently with Stoltenberg expressing concern that Russia is amassing 100,000 troops near Ukraine’s border. Moscow sees Kiev’s alignment with Western countries very negatively and considers an eventual adhesion of Ukraine into NATO as a red line.

Countries such as France and the United Kingdom have said they would defend Ukraine’s territorial integrity.

When opening a conference on NATO deterrence on Dec. 13, Stoltenberg said that “any Russian aggression will come at a high price.” He will receive Ukrainian President Volodymyr Zelensky at NATO headquarters on Dec. 16.