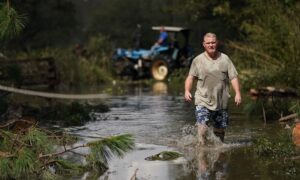 President Biden weighed on whether he thinks China will try to work out an arrangement with the Taliban, and a lawmaker defies the administration’s account of evacuation efforts.

The Biden administration says domestic terrorism is the biggest homeland security threat to America, but two former top officials in law enforcement say international threats such as China should be the focus.

The House is set to debate on the Democrats’ $3.5 trillion spending plan. The initiative includes spending on social programs, but Republicans say it will raise taxes and fuel inflation.