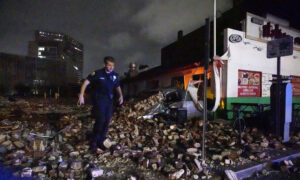 Americans are reportedly being held hostage at an airport in Afghanistan, according to a top Republican lawmaker. What does the Taliban want?

The Taliban are claiming control over the last province holding out against the militants’ advances. But the resistance group denies some of their claims. They say the Taliban is spreading propaganda.

Mexican forces break up a migrant caravan of about 400 people, several of whom are now arrested, after the Mexican president said he wants migrants to stay in southern Mexico.