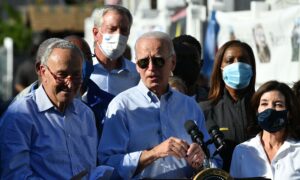 U.S. Secretary of State Antony Blinken testifies on the Afghanistan withdrawal. Democrats and Republicans point the finger on who’s to blame. What does Blinken have to say?

Should Congress import rare minerals from China and the Taliban? Republicans say no. Meanwhile, House Democrats defeat attempts by the GOP to stop Biden from imposing a new natural gas tax.

The California governor recall election begins. Some voters headed to the polls a day early. The election could result in a major political shift for the state.