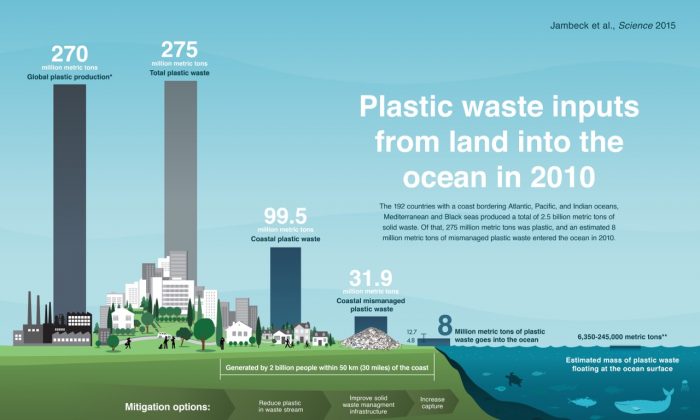 The source of most of this plastic comes from people living within 30 miles of the coast. Poorly managed (or open) landfills that allow lightweight plastics to blow away are a major problem. “It fairly quickly emerged that the mismanaged waste and solid waste dispersed was the biggest contributor of all of them,” said Roland Geyer an associate professor who helped UGA conduct this study.

“For the first time, we’re estimating the amount of plastic that enters the oceans in a given year. Nobody has had a good sense of the size of that problem until now,” said study co-author Kara Lavender Law, a research professor at the Massachusetts-based Sea Education Association.

Modern landfill techniques have only been deployed in developed countries like the United States, Europe, and parts of Asia since the 1970s. Many undeveloped countries do not ensure waste stays in the landfill. “It is incredible how far we have come in environmental engineering, advancing recycling and waste management systems to protect human health and the environment, in a relatively short amount of time. However, these protections are unfortunately not available equally throughout the world,” said Jenna Jambeck.

Plastic use is rising dramatically every year—in 2013 global plastic resin production was 299 million tons. This resin is used to make disposable plastic items like bags and water bottles. The average American now generates about 5 pounds of trash per day, 13 percent of that is plastic.

Jenna Jambeck predicts 155 million metric tons of plastic will enter the ocean by 2025. “We’re being overwhelmed by our waste. But our framework allows us to also examine mitigation strategies like improving global solid waste management and reducing plastic in the waste stream. Potential solutions will need to coordinate local and global efforts.”