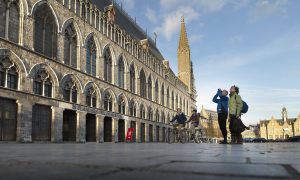 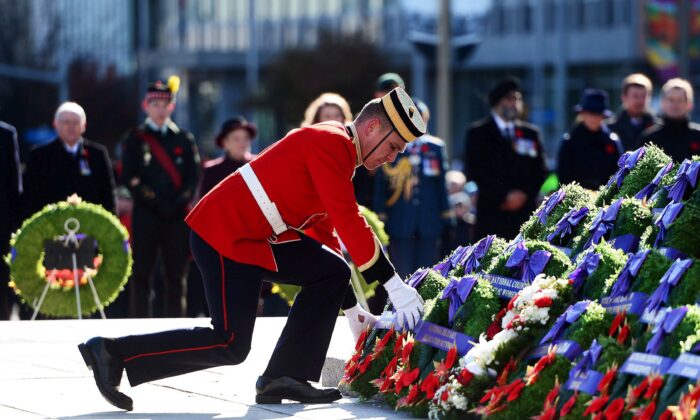 A soldier places a wreath during Remembrance Day ceremonies at the National War Memorial in Ottawa on Nov. 11, 2017. (The Canadian Press/Sean Kilpatrick)
Viewpoints

November 11: An Occasion for Remembrance and Gratitude

For Canadians and other members of the British Commonwealth, the celebration of a Nov. 11 “Remembrance Day” goes back more than 100 years.

Originally known after World War I as “Armistice Day” and since 1954 to American brothers-in-arms as “Veterans Day,” it has always been an opportunity to demonstrate the nation’s profound gratitude for military service and sacrifice.

Notwithstanding our ongoing appreciation for the sacrifices of our military in more recent overseas missions, we now find ourselves at a moment in history when the enormous casualty lists of World War I, World War II, and Korea are largely abstractions to the present generation.

Occasionally young students develop an active curiosity about military history and pivotal battles, but few can directly understand the human face of war and the intensity of the distress suffered by individual sailors, soldiers, and airmen.

History classes seldom celebrate the memory of fallen heroes or the ideals for which they fought, and only our present generation of senior citizens retain living memories of fathers, mothers, grandparents, uncles, aunts, cousins and family friends who served on battlefronts, or forfeited their lives, in the blood-soaked conflicts of the 20th century.

Nevertheless, the celebration of Remembrance Day has survived since 1919 as an occasion for national reflection. Across Canada, especially in rural areas where intergenerational family relationships remain strongest, scores of citizens remain drawn to wearing the poppy and attending local Nov. 11 events in honour of those who fell in defence of our liberty. Canada also hosts an annual ceremony at the National War Memorial in Ottawa.

A Challenging Year for Legions

Nov. 11, 2020, will bring to mind the 75th anniversary of the end of World War II, but this year Canadians will be called upon to remember under more challenging  circumstances.

It has been widely reported that legions across the country are facing severe restrictions. All branches are planning scaled down versions of their annual ceremonies as local governments limit public gatherings due to rising numbers of COVID-19 cases.

But even pandemic conditions shouldn’t deter us from demonstrating our gratitude for the more than 2,300,000 Canadians who have served throughout our nation’s history and the more than 118,000 who made the ultimate sacrifice.

Despite the staggering total of men and women who have been killed or wounded in global conflicts, remembrance has always been more an emotional than a mathematical exercise. The occasion has always concluded with a message of hope and coming together.

Following World War I a French woman, Madame E. Guérin, encouraged women and children in hard-hit areas of France to produce poppies for sale in support of wounded veterans. Canada took up the practice in November of 1921, and the tradition has continued ever since.

During the devastating Battle of Ypres in the spring of 1915, Lieutenant Colonel John McCrae, a doctor serving with the Royal Canadian Army Medical Corps, penned a poem that continues to be read at Remembrance Day ceremonies around the world. The lines became a stoic personal reminder of our natural ability to overcome destruction and discover hope in periods of despair.

In Flanders Fields the poppies blow
Between the crosses, row on row,
That mark our place; and in the sky
The larks, still bravely singing, fly
Scarce heard amid the guns below.

A Pittance of Time

In several parts of Canada, emotions about Remembrance Day still run high among ordinary citizens. At the turn of the 20th century, Terry Kelly, a Newfoundland-born singer-songwriter, produced a music video that didn’t leave a dry eye in the country.

On Nov. 11, 1999, Kelly reported being in a drug store in Dartmouth, Nova Scotia, when an announcement asked customers to prepare to observe two minutes of silence at 11:00 a.m. in respect for Canada’s veterans.

Terry was impressed with the store’s leadership role in observing the longstanding tradition and all customers willingly complied—with the notable exception of a man who was accompanied by his young child.

Terry’s displeasure toward the father for attempting to engage the store clerk in conversation during the period of silence and setting a poor example for his daughter led to the production of an iconic production called “A Pittance of Time.”

The music video depicts a scene of the ghosts of veterans past marching through the store while an embarrassed young girl looks to her father for some sign of respect and gratitude.

Kelly’s lyrics still speak for patriots across Canada and around the free world:

Take two minutes, would you mind?
It’s a pittance of time
For the boys and the girls who went over
In peace may they rest, may we never
Forget why they died.

The Virtue of Gratitude

It may have a lot to do with the connection between the practice of remembrance and the critical virtue of gratitude. Gratitude has always been a lynchpin of our humanity. It is expressed in various ways. For many Canadians it remains rooted in a worship of God, but for all of us it is essential to a well-ordered relationship between the past and the present.

When we cease to be grateful to parents, grandparents and others who have come before us, our minds grow course and our behaviour is tainted by disorder. We lose our continuity of purpose and all sense of certainty for our future. We become possessed by an empty sense of pride and fall into excessive habits of hubris and self-worship.

Under the present circumstances of a global pandemic, many feel they have little to be thankful for. They forget that the young men who tucked down a shoulder and moved forward into a murderous storm of lead and grief on the killing grounds of Vimy, Ypres, Dieppe, and Normandy faced a far greater peril than the COVID-19 virus.

When our forbears were called to serve, the option of “virtual” engagement was not on the table.