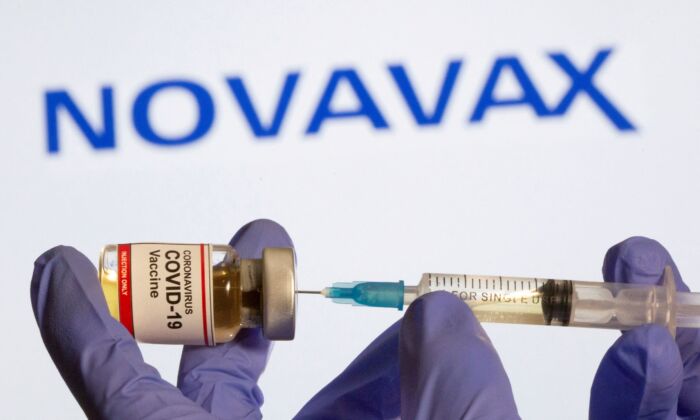 A woman holds a small bottle labeled with a "Coronavirus COVID-19 Vaccine" sticker and a medical syringe in front of displayed Novavax logo in this illustration taken, on Oct. 30, 2020. (Dado Ruvic/Reuters)
Vaccines & Safety

Novavax Inc. has delivered just a small fraction of the 2 billion COVID-19 shots it plans to send around the world in 2022 and has delayed first-quarter shipments in Europe and lower income countries such as the Philippines, public officials involved in their government’s vaccine roll-outs told Reuters.

Novavax said it has completed delivery of around 10 million vaccine doses to Indonesia and that shipments of several million shots arrived in Australia and New Zealand on Monday. The company declined to comment on the exact number of deliveries it has made but said it is moving as quickly as possible to ship its contracted supplies for this quarter.

Some shipments have been held up by regulatory processes and are waiting in a distribution warehouse to go to healthcare providers, Novavax spokesperson Amy Speak said.

Gaithersburg, Maryland-based Novavax, which had never launched a product, had ambitions to provide a vaccine for the world, promising to deliver its shots by mid-2021.

Shipments to the European Union, Indonesia, and the Philippines were held back by a late regulatory approval from the World Health Organization (WHO), export limitations of its production partner the Serum Institute of India, and delayed approval of individual vaccine batches by European regulators, who must vet the shots before they can be distributed, according to officials in those regions.

The delivery delays have left at least one country reconsidering its Novavax order.

The company has yet to deliver vaccine on its largest contract for 1.1 billion doses to COVAX—a global vaccine distribution program for poorer countries—which would make Novavax its third largest supplier, according to business data and analytics firm GlobalData Plc.

Novavax did not provide a timeline but told Reuters it expects to deliver around 80 million doses in the current quarter to COVAX, less than 10 percent.

A spokesperson for the GAVI vaccine alliance that co-runs COVAX with the WHO said it expected Novavax doses to be delivered soon.

“It’s concerning when they have been saying they have been ready to ship millions of doses but the numbers you’re hearing are different,” said Mayank Mamtani, a healthcare analyst at B. Riley Securities.

Novavax is expected to earn around $5 billion in 2022 from COVID-19 vaccine sales, according to Refinitiv data.

Its two-dose vaccine has been authorized by WHO and European Union regulators, as well as countries including India, Indonesia, and the Philippines.

Trial data has shown the vaccine is more than 90 percent effective in preventing severe illness and death.

Low- and middle-income countries will feel the pinch the most if Novavax is missing planned shipments, said Stephen Morrison, the director of the global health policy at Washington D.C. research group Center for Strategic and International Studies. “It’s going to be painful for COVAX and painful for its bilateral partners.”

Although India has said Serum Institute shipped around 10 million shots to Indonesia in November and December, an Indonesian official who declined to be named said the country has received only around 200,000 doses. The Indian government has cleared 20 million Serum shots to be shipped to Indonesia, Novavax said.

A Philippines official said the country has not received any of the 30 million shots it ordered.

The Philippines is renegotiating its contract and considering reducing its order from Novavax, in part because it has 96 million vaccine doses in its national stockpile, said Vaccination Secretary Carlito Galvez, head of COVID-19 vaccine procurement for Philippines. The country has authorized nine COVID vaccines.

Novavax did not comment on the Philippines deliveries or new contract but said it is working with governments to meet regulatory requirements for release of doses.

Novavax had said it would roll out shots in Europe by January but that has been delayed, the company spokesperson said. The initial shipments from Serum Institute were delivered to its distribution facility in the Netherlands and are awaiting final regulatory clearance for release, she said.

At least two EU countries have pushed back their planned timelines for administering Novavax shots as a result, a person familiar with the matter said.

Novavax has had difficulty getting the final regulatory nod because it has yet to provide sufficient information about batches produced in India, a person familiar with discussions between Novavax and EU officials said. Under the EU deal, initial supplies to the bloc would come from India.

Dutch health authority RIVM, which is tasked with clearing the batches, declined to comment on the reason for the timing but said the vaccine will be available from early March.

“We expect to ship as soon as the testing and release is complete and we are working to make that happen as quickly as possible,” the Novavax spokesperson said.

The United Kingdom approved Novavax’s shot on Feb. 3, but the drugmaker has not said when it will begin distributing doses there.

Novavax filed for U.S. authorization late last month, almost a year after it had originally planned to do so.

Peter Shapiro, a pharmaceutical industry analyst at GlobalData, said: “The question is whether these manufacturing and logistics issues are going to get better with time.”