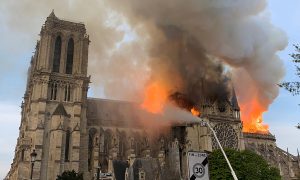 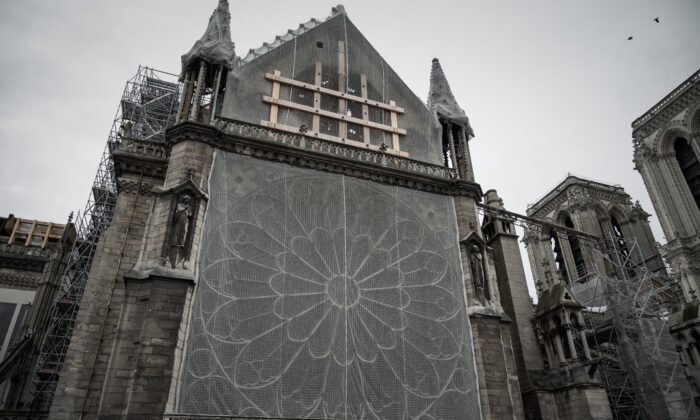 This picture taken on October 15, 2019 shows wood structures, protection nets and scaffolding at the Notre-Dame Cathedral in Paris, six months after the April 15 blaze. (Philippe Lopez/AFP via Getty Images)
Europe

Notre-Dame Restoration Yet to Start Six Months After the Blaze

PARIS—Six months after the massive fire that almost razed Paris’ Notre-Dame, the restoration work at the iconic cathedral has not started in earnest, and the official reopening date is yet to be determined, officials said on Oct. 15.

“We’re still in the first phase, the phase of securing [the monument’s structure], which is lasting longer than initially planned,” said Monsignor Patrick Chauvet, the top administrative cleric of Notre-Dame.

The April 15 fire caused the roof and spire of the Gothic landmark to collapse, although the main bell towers and the outer walls were saved by firefighters. Some priceless artwork and religious relics were also saved.

An official cause of the blaze has yet to be determined.

When the fire broke out, maintenance work was underway on the cathedral’s spire, and scaffolding had been erected. The metal scaffolding poles melted in the fire. Part of the reason for the delay, officials said, was that the deformed poles had to be disentangled from the cathedral’s structure.

French President Emmanuel Macron has set a target of five years for restoring the cathedral, which would coincide with the 2024 Olympic Games to be held in Paris. But French Culture Minister Franck Riester has said repeatedly that the work shouldn’t be rushed.

In the meantime, Chauvet said he wanted to bring life to the esplanade in front of the cathedral so there will be something for visitors to see while the building itself is off-limits.

He suggested that a copy of Our Lady of the Pillar, a statue salvaged from the cathedral’s interior, could be installed there.

Christophe Rousselot, general delegate of the Notre-Dame Foundation, said there were other projects in the works for the cathedral during restoration.

“We won’t leave the worshipers, the tourists, behind barricades for five to seven years,” he said. “We have to welcome them properly.”