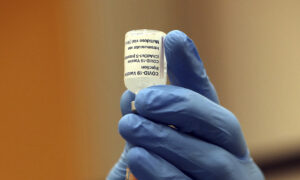 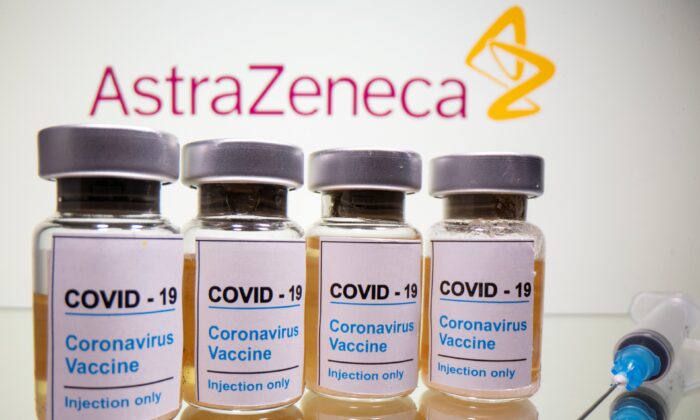 Vials with a sticker reading "COVID-19 vaccine/Injection only" and a medical syringe are seen in front of a displayed AstraZeneca logo in this illustration taken on Oct. 31, 2020. (Dado Ruvic/Illustration/File Photo/Reuters)
WORLD

Not Perfect, but Saves Lives, AstraZeneca Says of COVID-19 Vaccine

AstraZeneca’s COVID-19 vaccine is not perfect, but will have a big impact on the pandemic, its chief executive predicted on Thursday, as the drugmaker pledged to double supplies to more than 200 million doses per month by April.

The two-dose shot, developed with Oxford University, has been hailed as a “vaccine for the world” because it is cheaper and easier to distribute than some rivals.

But its rapid approval in Europe and elsewhere has been clouded by doubts over its most effective dosage and interval between doses.

Data at the weekend also showed it was less effective against a fast-spreading South African variant of the virus, and the company has been embroiled in a row with the European Union over supply delays.

“Is it perfect? No it’s not perfect, but it’s great. Who else is making 100 million doses in February?” CEO Pascal Soriot said on a conference call about the vaccine.

“We’re going to save thousands of lives and that’s why we come to work everyday.”

AstraZeneca said it expected much-anticipated data from the U.S. trial of the vaccine before the end of March, and that it was confident the shot offered relatively good protection against severe disease and death for the South African variant. Its disappointing results were against milder cases.

However, after rising to become Britain’s most valuable company last summer, the company has now slipped to sixth, in a move some analysts attribute to doubts over the vaccine.

“In a year or two we will look back and everybody will realize we made a big impact,” Soriot said.

AstraZeneca’s shares were up more than 2 percent in morning trade after the company forecast a pick up in earnings growth this year on strong demand for its cancer and other new therapies.

It has pledged not to make any money from its COVID-19 vaccine during the pandemic.

The company said it expected 2021 revenues to rise by a low teens percentage and core earnings of $4.75 to $5.00 per share, as it beat expectations for fourth-quarter sales.

The earnings guidance equates to 18–24 percent growth, after 15 percent in 2020, but was a little lower than the $5.10 per share analysts were expecting, as the company flagged more spending this year.

The COVID-19 vaccine is not included in the guidance and the company said its sales would be reported separately from the first quarter of 2021.

While public interest is focused on the vaccine, AstraZeneca’s core business of diabetes, heart, kidney, and cancer medicines has been steadily growing, helping the company to turn around years of decline.

Rounding off its third consecutive year of product sales growth, sales for the three months to December surpassed a company-compiled consensus, while core profit of $1.07 per share was in line with expectations.