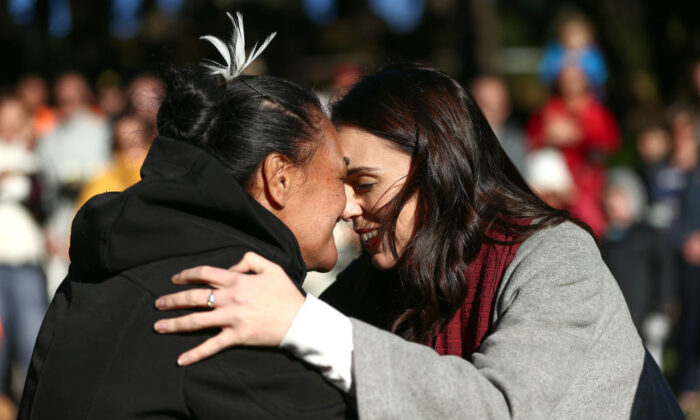 Not About Race, but Power: Maori on New Zealand’s Co-Governance Agenda

The push to give the Indigenous people of New Zealand an equal voice in government and various bodies has devolved into a power-grabbing contest between a small group of affluent individuals, according to a Maori commentator.

Casey Costello, a founding trustee of lobby group Hobson’s Pledge, told The Epoch Times that the policy of “co-governance” between the government and Maori tribes had become a “runaway freight train” where the concept of government accountability and equality before the law has been lost.

“From my point of view, speaking as a Maori, when you talk about co-governance, that would suggest that Maori are having some influence in who’s been appointed to represent them. And it’s not the case.

“I think we’ve reached the point that we’re talking about a tribal control rather than a co-governance,” she said.

Costello said New Zealand has reached a point where debate against the co-governance system is shot down and diluted into an issue about race.

“You should be able to say it’s a bad piece of legislation without having to go ‘but really I’m not racist!’

“It’s not about race. Hasn’t been about race for a long time. It’s about a power and control battle between a small number of individuals who claim they speak for all Maori when they don’t,” she said.

Co-governance is not clearly defined by the Ardern government, but Member of Parliament (MP) Jamie Strange describes it as an “arrangement for negotiated decision-making between iwi (tribes) and other groups such as central government.”

The policy is derived from the 1840 Treaty of Waitangi, signed between the British Crown and Maori chiefs, that ceded Maori sovereignty, guaranteed Maori land rights, and assured Maori people the same rights as British citizens.

However, an issue with the Treaty stems from the fact that there are two versions, written in English and Maori, that are not direct translations of each other due to language limitations.

The Treaty is now understood to signify a “partnership” between the Crown and the Maori people, based on the Maori version of the Treaty, leading to the current “co-governance” approach.

This can be seen on the website for The Office for Maori Crown Relations (Te Arawhiti), which states a key function of its portfolio is “supporting the Crown to act fairly as a Treaty partner.”

But this “reinterpretation” has resulted in a “distortion” of New Zealand rights, Costello argues.

“To suggest that Queen Victoria decided that she was going to form a partnership with some native tribe in New Zealand and co-run New Zealand is just nonsensical,” she said. “It just can’t have been what was intended.”

Is Co-Governance Compatible With Democracy?

Costello expressed her concern for the co-governance agenda for an ethnic group that represented around 17 percent of the population—giving Maori a disproportionately large voice in local bodies and government.

She noted the newly passed Canterbury Regional Council (Ngai Tahu) Representation Bill, which will allow the appointment of up to two unelected Maori representatives onto the council with full voting rights. Ngai Tahu is the name of the local tribe.

“They’re not controlled by any legislative requirements regarding obligations to meet the scrutiny of a democratically elected individual and there’s no ability to kick them out,” Costello said.

The New Zealand Labour Party welcomed the passing of the final reading of the Bill in parliament on Aug. 3, with Labour MP Rino Tirikatene calling it a “historic day.”

“It is about recognising the responsibility that Ngai Tahu has as kaitiaki (guardian) of the air, waters, land, and coast of the region and enabling them to perform that duty” Tirikatene said.

“The push is coming from the increasingly out of touch Labour Maori Caucus,” he said on Aug. 4. “Who exactly did they ask for permission to change our democracy? Who did they ask if we wanted co-governance?”

Similarly, ACT Party Leader David Seymour said in his State of the Nation speech in February that the idea of co-governance was “incompatible” with democracy.

“Democracy means one person, one vote,” he said.

“We will have to actively push back against the divisive idea that there are two kinds of New Zealanders.

“We will need to remove the constant references to the Treaty from the law and replace it with a commitment to liberal democracy.”

Meanwhile, National Party Leader Christopher Luxon told The Morning Report in April that co-governance had occurred under both Labour and National governments for over a decade.

What About the Average Maori?

Costello said average Maori people have increasingly begun to question the agenda after seeing the lack of change it brought to their lives.

“I think there’s a lot more like me who was saying, ‘Well hang on. Where’s all this money going?’” she said. “None of this has trickled down. There’s no benefit to the Maori who are actually struggling.”

“When you make your offer of assistance predetermined based upon your race, and not your needs, the most in need aren’t getting supported.”

However, Costello believes the agenda has successfully promoted a victim mentality within the Maori youth and hidden the more important issues behind why kids are failing to succeed in life, such as the broken family unit and not finishing school.

She noted that Maori who move to Australia often have higher standards of income, education, and levels of homeownership despite the lack of affirmative action.

“Yet we’re worried about stuff that isn’t addressing the social problem,” she said, referring to the new separate Maori health system and the water centralisation proposal that will give Maori co-governance over the country’s water.