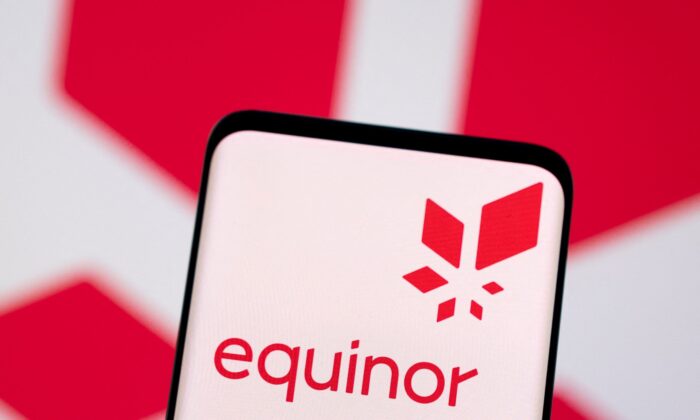 Equinor logo is seen displayed in this illustration taken, on May 3, 2022. (Dado Ruvic/Illustration/Reuters)
Markets

OSLO—Norwegian offshore oil and gas workers went on strike over pay on Tuesday, the first day of planned industrial action that could cut the country’s gas exports by almost 60 percent and exacerbate supply shortages in the wake of the Ukraine war.

Oil and gas from Norway, Europe’s second-largest energy supplier after Russia, is in high demand as the country is seen as a reliable and predictable supplier, especially with Russia’s Nord Stream 1 gas pipeline due to shut for maintenance from July 11 for 10 days.

The British wholesale gas price for day-ahead delivery leapt nearly 16 percent, though the price of Brent crude fell as fears of a global recession outweighed supply disruption fears, including the strike in Norway.

“The strike has begun,” Audun Ingvartsen, the leader of the Lederne trade union said in an interview, adding the union would escalate the strike to pressure employers to address demands for wage increases to compensate for rising inflation.

The government can intervene to stop any strike in exceptional circumstances.

However, the Norwegian Labour Ministry told Reuters on Tuesday it had no comment on the ongoing conflict.

“In accordance with how wage disputes are resolved in Norway, it is the social partners’ responsibility to find a solution to any conflict,” Deputy Labour Minister Maria Schumacher Walberg said in an emailed statement to Reuters.

Union leader Ingvartsen said the escalation was not designed to pressure the government to intervene and impose a settlement, adding that he had not been in touch with the government.

“Our goal is that employers engage with us and listen to their employees,” he said.

On Tuesday, oil and gas output will be reduced by 89,000 barrels of oil equivalent per day (boepd), of which gas output makes up 27,500 boepd, energy firm Equinor said.

On Wednesday, the strike will increase gas cuts to 292,000 boepd, or 13 percent of output, Equinor and the employer’s association Norwegian Oil and Gas (NOG) said.

Oil output will be cut by 130,000 barrels per day from Wednesday, they said. That corresponds to about 6.5 percent of Norway’s oil production, according to a Reuters calculation.

Lederne represents senior offshore workers considered critical to operations and industrial action in one field can have a ripple effect on others which pump oil and gas through the affected field.

A seventh field, Tyrihans, will also have to shut on Wednesday because its output is processed by Kristin.

By July 9, Lederne said they will also strike at the Sleipner, Gullfaks A and Gullfaks C fields.

Consequently, this will also shut down the Kvitebjoern, Gina Krog, Sleipner West, Gugne, Sigyn and Utgard fields, it added.

The cuts to oil and gas production would lead to 1.8 billion Norwegian crowns ($100 million) per day of lost revenue, NOG estimated.

The planned escalation would be “very damaging and serious for both Europe and Norway,” NOG boss Hildegunn Blindheim said in the statement.

Members of the Lederne trade union on Thursday voted down a proposed wage agreement that had been negotiated by companies and union leaders.

They turned down a pay rise of between 4 percent and 4.5 percent, compared with a hike of 3.7 percent agreed under a framework deal between Norway’s main employee and employer organisations in April which sets the benchmark for wage talks in Norway.

Norway’s other oil and gas labour unions have accepted the wage deal and will not go on strike.

By Gwladys Fouche and Nora Buli