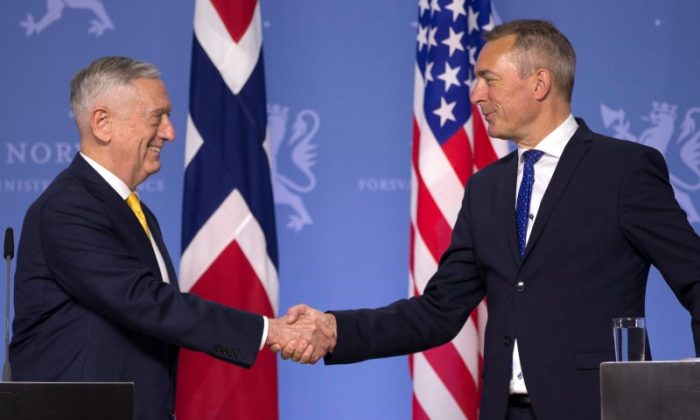 US Secretary of Defence James Mattis shakes hands with Norwegian Minister of Defense Frank Bakke-Jensen during a press conference at the Ministry of Defence in Olso, Norway on July 14, 2018. (NTB Scanpix/Trond Reidar Teigen/via Reuters)
Europe

OSLO—Norway, described by U.S. President Donald Trump as NATO’s “eyes and ears” in the north, recommitted itself to lifting its defense spending to meet NATO targets during talks on July 14 with Trump’s defense secretary.

“Norway is committed to the two percent goal in NATO,” Norwegian Defense Minister Frank Bakke-Jensen told reporters in a prepared statement, standing alongside US Defense Secretary Jim Mattis, who praised Norway‘s role in the alliance.

Bakke-Jensen added that Norway hiked defense spending by four percent in real terms since 2013 and would “continue substantial increases in spending also in the coming years.”

Norway is considered one of America’s most valuable European allies, helping gather intelligence on Russia’s maritime military activities, partnering with US forces in Afghanistan and the Middle East and buying advanced US weaponry, including stealth fighter jets.

But the oil-rich nation only spends about $6.5 billion per year on defense, or about 1.6 percent of gross domestic product—below NATO’s two percent target by 2024.

That earned it a rebuke from Trump, who wrote a letter on June 19 to Norway saying it was the only NATO ally sharing a border with Russia that lacked “a credible plan” to spend two percent of its GDP on defense, according to a copy of the letter seen by Reuters.

Trump acknowledged political pressures in Norway but warned it would become “increasingly difficult to justify to American citizens why some countries continue to fail to meet our shared collective security commitments.”

He said Oslo’s recommitment to the two percent goal was heartening. “We are stronger today than we were a month ago or a year ago because of the deliverables that came out of that [NATO] summit,” he said after meeting Soereide.

And he praised “Norway‘s leadership in the Nordic region and especially up in the Arctic where you serve as NATO’s sentinel … You are definitely contributing beyond your weight class,” he said.

Soereide praised Mattis as a “star in NATO.”

During closed-door talks at the NATO summit this week, Trump warned that if European governments did not spend more on defense, the United States “would have to look to go its own way,” sources told Reuters. Trump has subsequently said he was satisfied with spending commitments made in Brussels.

But the US president, who will meet Russian President Vladimir Putin in Helsinki on July 16, says allies must share more of what he calls an unfair burden on US taxpayers in funding an alliance focused on discouraging pressure from a resurgent Moscow.

Norway is a founding member of NATO, which was created in 1949 to contain a military threat from the Soviet Union.

Oslo has grown increasingly concerned about Russia since Moscow annexed Crimea from Ukraine in 2014, while adding that it does not regard its much larger neighbor as a direct threat.

Norway plays a vital role gathering intelligence on Russian submarines and other maritime training activity. Much of Russia’s naval training occurs in international waters near Norway, giving it a privileged perch for observation.

Norway will also soon play host to one of NATO’s biggest exercises in decades, and possibly Norway‘s biggest exercise ever, in October and November when some 40,000 forces are expected to arrive in the country. The drill will simulate NATO efforts to help it repel an attacking force.

Mattis said the exercise “will demonstrate that the U.S. and all of NATO stand with Norway as we seek to maintain peace and stability in Europe.”

Norway, which has a 122-mile border with Russia, is also preparing to host up to 700 US Marines starting next year, compared with 330 presently, who carry out harsh winter training.

The additional numbers will be based closer to the border with Russia in the Inner Troms region in the Norwegian Arctic, rather than in central Norway.

Russia’s embassy in Oslo said the additional Marines, who rotate in and out of Norway, “makes Norway less predictable and could cause growing tensions, triggering an arms race and destabilizing the situation in northern Europe.”

“We see it as clearly unfriendly, and it will not remain free of consequence,” the embassy said.

By Phil Stewart and Alister Doyle