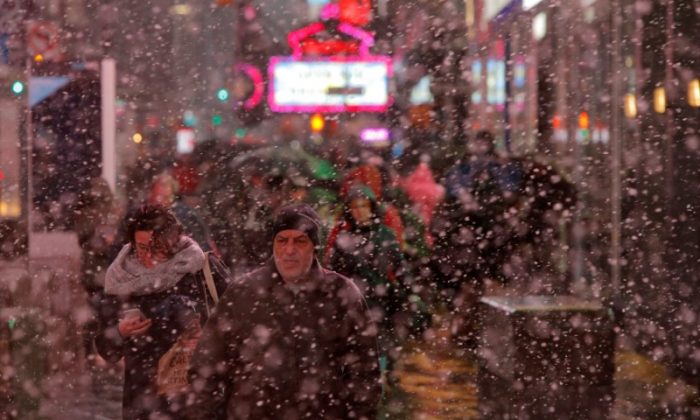 A man walks through Times Square during a winter nor'easter in New York City, U.S., March 2, 2018. (Reuters/Andrew Kelly)
US News

PRINCETON, NJ–Some 1.8 million customers remained without power throughout the eastern United States on Saturday, and communities on the New England coast faced more flooding a day after a powerful storm snapped trees, downed wires and killed at least seven people.

The remnants of the storm, known as a nor’easter, continued to buffet the northeastern United States with wind gusts of up to 50 miles per hour even as it moved hundreds of miles out to sea, hampering efforts to restore power.

The governor of Massachusetts, Charlie Baker, declared a state of emergency on Saturday afternoon, following similar announcements by the governors of Virginia and Maryland on Friday.

The moves give those states access to federal resources. Baker said the National Guard was deployed to numerous municipalities throughout eastern Massachusetts to help with rescue and evacuation efforts.

Trains were running with delays between Washington and New York along Amtrak’s Northeast Corridor, the passenger railroad said, after service was suspended for several hours earlier on Saturday due to power outages.

The storm carried hurricane-force winds in excess of 90 miles per hour, sending seawater churning into streets in Boston and nearby shore towns – the second time the area has been flooded this year.

The National Weather Service (NWS) warned that coastal states from Massachusetts to Maine could experience another round of flooding late on Saturday when the high tide returns, though it is not expected to be as severe as earlier surges.

Private forecasting service AccuWeather said the storm dumped as much as 18 inches of snow on parts of New York state and Pennsylvania. The Massachusetts town of East Bridgewater received nearly 6 inches of rain, the NWS said.

The storm also snarled transportation from the Middle Atlantic into New England, with more than a quarter of flights into and out of New York’s three major airports and Boston’s airport canceled on Friday, tracking service FlightAware.com reported.

The problems carried over into Saturday, with hundreds of flights canceled into and out of New York and Boston, according to the website.

One flight landing at Washington’s Dulles International Airport on Friday experienced turbulence so rough that most passengers became sick and the pilots were on the verge of becoming ill, the Federal Aviation Administration said.