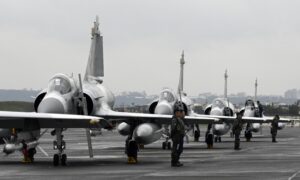 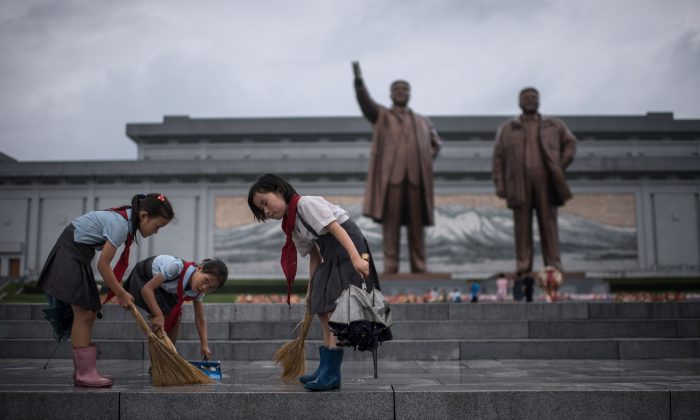 Students clean the steps in front of the statues of late North Korean leaders Kim Il-Sung and Kim Jong-Il in Pyongyang on July 27, 2017. North Korea is censoring messages that can be delivered on Mother’s Day, which is used to celebrate mothers who educate their children to be 'good socialist revolutionaries.' (ED JONES/AFP/Getty Images)
Asia & Pacific

North Korea has begun censoring the messages that can be delivered on its fledgling Mother’s Day holiday, started by dictator Kim Jong Un in 2012.

Mother’s Day in North Korea is used to promote mothers who uphold the North Korean regime.

“The happiness of family and the future of the nation lie in bringing up sons and daughters into true human beings, revolutionaries devoting themselves to the country and the people. This is the noble outlook on happiness and future the mothers of this country cherish,” reads a recent article by KCNA, North Korea’s state-run media.

Mother’s Day is celebrated on Nov. 16 in North Korea, commemorating the speech “The Duty of Mothers in the Education of Children” made on Nov. 16, 1961, by North Korea’s first communist dictator, Kim Il Sung.

The regime uses the day to uphold examples of mothers who have taught their children to support the Kim regime.

“Our revolutionary ranks are growing stronger as there are many diligent and tender-hearted mothers who sent their sons and daughters to the posts for defending the country,” reads the article.

Ironically, any information about Kim’s own mother, including her identity, is a state secret in North Korea.

“Nobody in North Korea knows who his mother is,” former North Korean diplomat Thae Yong Ho told lawmakers in Washington, DC, on Nov 1.

According to KCNA, children commemorate the day to celebrate mothers who have followed the ideals of the regime.

“On the significant Mother’s Day every year, all the sons and daughters of the country extend warm congratulations to the mothers bringing up their children with their love, feelings and devotion and upholding the socialist country,” reads the KCNA article.

But just as the holiday has started to take hold, it has come under new restrictions, reports NK Daily, a news website that specializes in obtaining information from sources inside North Korea.

North Korean authorities have banned people from attaching special messages of thanks to bouquets of flowers sent to mothers for the occasion.

According to a source inside North Korea, the regime was afraid people’s affection for their mothers would compete with their affection for Kim Jong Un, and his father, and grandfather.

“When the holiday was first announced, people were not that fussed. But as the regime began pushing propaganda about the holiday in subsequent years, people have started putting more thought into what to buy their mothers in the days leading up to the holiday,” a source in South Pyongan Province informed Daily NK on Nov. 15.

“As the day became more popular, state-run shops and other merchants began offering various kinds of flower arrangements. But the regime has begun restricting the practice of attaching ribbons signifying a ‘thank you’ or ‘I love you’ since it encroaches upon the significance of cult-of-personality offerings of flower baskets in front of portraits (of Kim Il Sung and Kim Jong Il),” the source added.

The restriction has stirred resentment among North Koreans, said the source.