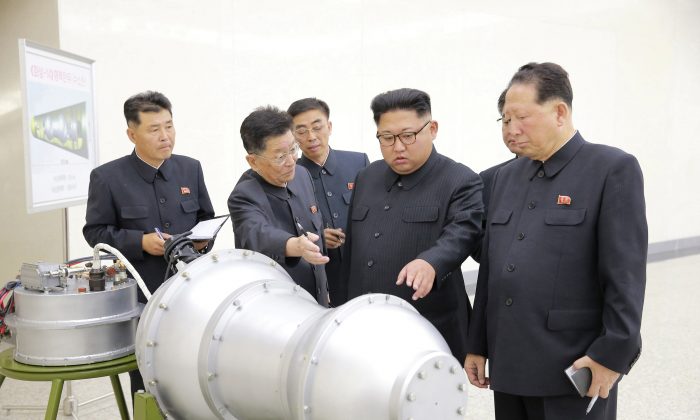 North Korea‘s sixth nuclear test on Sunday showed the country has either developed a hydrogen bomb—which has vastly more destructive power than atomic bombs—or was very close to obtaining one.

Several North Korea leadership experts say they are part of a cadre of weapons experts at the frontline of the young leader’s stated ambition: Developing an intercontinental ballistic missile (ICBM) that can carry a nuclear weapon to the United States.

Compared to his father Kim Jong Il and grandfather Kim Il Sung who preferred small working groups and middle managers to deal with weapons programs, the 33-year-old leader has been more personally involved with these scientists, the experts say, citing his frequent appearances with the technocrats at state events, weapons tests and field inspections.

“It appears that Hong is spearheading the nuclear development program as a senior party official and Ri is in charge of nuclear tests such as hydrogen bombs on a working level,” said Yang Moo-jin, professor at the University of North Korean studies in Seoul, who monitors the country’s hierarchy and leadership.

Reuters could not independently confirm the precise role of the two men.

The two scientists have become increasingly high profile as Pyongyang’s weapons programs have advanced at a rapid pace under Kim’s leadership, a Reuters review of North Korean state media showed.

In January 2016, Hong and Ri were the first and second in line to receive medals personally awarded by Kim at a ceremony to mark the country’s fourth nuclear test, state TV footage showed.

Two months later, they accompanied a smiling Kim inspecting a silver-colored sphere, which the North said was a miniaturized warhead capable of being fitted to an ICBM.

The wider group of weapons technocrats includes a trio of rocket scientists who have accompanied Kim on several crucial missile launches, including two July ICBM test launches that showed much of the U.S. mainland was now within range.

Experts say Kim’s hands-on approach may have contributed to faster development of its nuclear weapons and missiles, while allowing the scientists to develop personal links to the leader.

“(Kim) Jong Un goes out of his way to show they have a personal closeness to him,” said Michael Madden, an expert on the North Korean leadership, pointing to Kim’s frequent appearances with cadres engaged with its weapons program.

“It’s likely linked to the fact that (the scientists) are making huge accomplishments in this area, and thus making big accomplishments for Kim Jong Un as leader of North Korea.”

Like the three rocket scientists, Ri and Hong have been blacklisted in recent years by the United Nations, the United States or South Korea for their roles in North Korea‘s weapons programs.

The United Nations blacklisted Ri in 2009 citing his involvement “in the production of weapons-grade plutonium”, while an expert UN panel this year noted Hong’s “key role in the country’s nuclear program” as it recommended he also be sanctioned.

Siegfried Hecker, a nuclear science professor at Stanford University and one of the last Americans to visit Yongbyon, recalled meeting Ri during his several visits there between 2004 and 2008. In one of these visits, Ri showed Hecker around the plutonium reactor and the radiochemical lab there.

Ri “stated with pride” that North Korea‘s nuclear researchers have mastered plutonium production with no outside help, Hecker said in a 2006 report about his Yongbyon visit to Standford’s Center for International Security and Cooperation. Hecker did not immediately respond to requests for comment about Ri or the North Korean nuclear program.

In a statement carried by KCNA hours before the sixth test, Kim said all components of the hydrogen bomb were “homemade”, allowing North Korea to produce nuclear weapons “as many as it wants.”

Hong is a former chief engineer at Yongbyon and has been at the ruling party’s munitions department since the mid-2000s. He rose to prominence after Kim Jong Un took power in December 2011 following the death of his father, according to South Korean government database.

Hong, 75, has been seen accompanying Kim on nuclear tests and long-range missile launches since 2012, the South Korean database and pictures released by KCNA show.

He was educated in central and eastern Europe and possibly in Russia as well, while Ri attended seminars abroad, North Korea leadership expert Madden said.

“They are top-level officials and the last generation of those who studied in the old Communist world in the good old days,” he said.

By Ju-min Park and Soyoung Kim