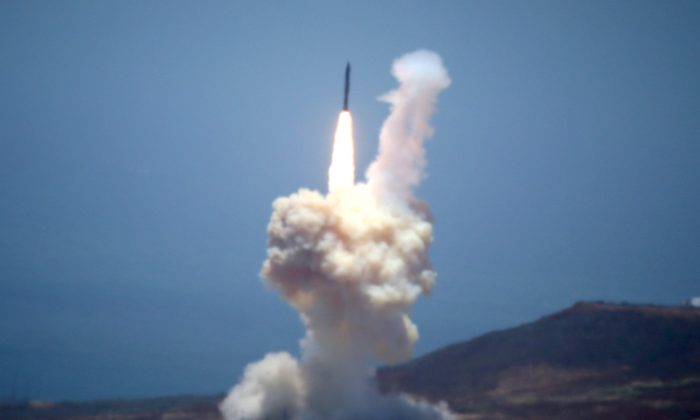 Kim Jong Un’s race for a nuclear missile could become a lesson in unintended consequences as the United States and other nations try to prepare for the possibility of another Korean War.

The communist regime’s successful missile test on Nov. 28, came 12 days after Congress approved a $700 billion defense budget that slotted $12.3 billion for the Missile Defense Agency to rapidly buildup America’s missile defenses. That was $4 billion more than President Donald Trump had asked for missile defense, even before North Korea proved it could hit Washington D.C. with a missile.

If Kim keeps talking about nuclear war against the United States and other countries, it’s a fair expectation that ballistic missile defense will get more money and attention.

That could be transformative for the sometimes over-looked program and could help it move beyond its current limitations.

The Trouble With ICBMs

There are two major types of ballistic missile defense: intercontinental and intermediate or medium range.

But ICBMs are a tougher missile to crack. Once they are in the air, they are much harder to shoot down, in part because they are faster, but also because advanced ICBMs have so-called “penetration aids” that help them get past enemy defenses and reach their target.

For example, some ICBMs have been designed to contain multiple warheads so that one missile can hit several targets. Others may have decoys, radar jamming, or use the final-stage rocket booster to make the missile look larger than it is so defensive missiles can’t pinpoint it.

Fortunately, North Korea is believed to be some distance away from developing a nuclear warhead that can withstand the pressure and heat of re-entry after reaching space, let alone deploying decoys or carrying highly-miniaturized nuclear warheads that would allow one missile to threaten multiple targets.

Which is a good thing, because the U.S. ballistic missile defense is likely not yet ready to deal with those kind of missiles. It is, however, able to deal with a simple, single-warhead missile like North Korea has been threatening to launch.

In May, the United States Missile Defense Agency conducted its first live-fire test of its Ground-based Midcourse Defense system that protects America from ICBMs. The system shot down an ICBM launched towards Alaska from one of the Marshall Islands, out past Hawaii towards Australia.

A spokesperson from the agency said no further details could be provided about the test ICBM target that was shot down, but he did affirm it represented “a threat we expect to face.”

Since North Korea is the only country currently threatening to launch nuclear-armed ICBMs at the United States, is safe to assume that the test used an ICBM target that was more like a first-generation North Korean ICBM than Russia’s latest Topol-M ICBM, which can change course and deploy defensive measures meant to negate U.S. missile defenses.

The pressure is now on Syring’s successor, current MDA head Lt. Gen. Samuel A. Greaves to rapidly upgrade the system.

Congress has given the Pentagon six months to plan a “suitable, survivable, and effective Integrated Air and Missile Defense Battle Command System program,” according to the 2018 defense budget approved by Congress.

The new budget directs funds to next generation weaponry, like directed energy weapons and space-based sensors, that the MDA could use to take out future missile threats. It also demands the Air Force come up with a plan to upgrade missile sensing systems.

While Congress could be reasonably skeptical about funding a missile defense program that is all but hopelessly overwhelmed by the nuclear arsenals of China or Russia, dealing with a nuclear new comer like North Korea looks like a much more achievable—and necessary—goal.

With the Kim regime facing tighter sanctions and a renewed U.S. commitment to missile defense, North Korea may be in an arms race it can’t keep pace with.