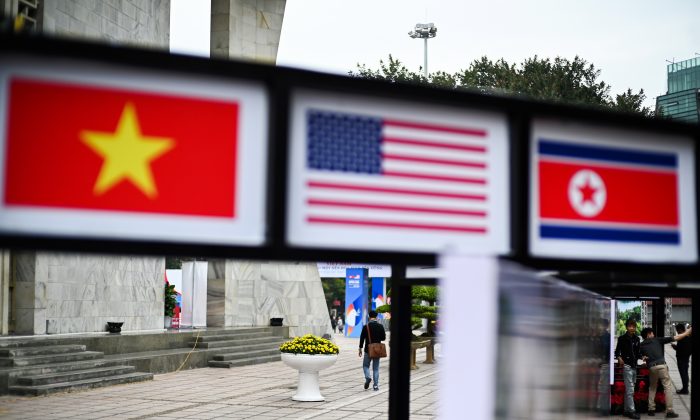 People walk past pictures of Vietnam, US and North Korean flags in Hanoi on Feb. 25, 2019, ahead of the second US-North Korea summit. (JEWEL SAMAD/AFP/Getty Images)
Politics

U.S. Democrats, intelligence officials, and other skeptics of the meeting were criticized in a commentary by state news agency KCNA for “chilling the atmosphere” ahead of the second summit. The two leaders aim to build on commitments to denuclearize that were reached in their first summit in Singapore last June.

KCNA claimed that if Trump listens to skeptics in the United States, he would face a “shattered dream” and “miss the rare historic opportunity” to improve relations with North Korea.

“The Democratic Party of the U.S. and other opponents to the negotiations move overtly and covertly to disrupt them as supported by skepticism, backed by all sorts of groundless stories and misinformation even at such a crucial moment as now,” said the commentary, released under the name Jong Hyon.

The commentary said critics of Trump’s meeting would bear the responsibility if the summit failed, which they said would leave the people of the United States exposed to “security threats.”

Last’s year’s meeting was the first of its kind between North Korea and the United States, after which Pyongyang halted their testing of nuclear weapons and ballistic missiles. Washington is still maintaining its tough sanctions against the communist country until North Korea achieves complete, verifiable, and irreversible denuclearization.

State media, in other parts of the article, criticized former President Barack Obama’s North Korea strategy, claiming it took the two countries to the brink of war. KCNA described the former president’s policy as “the worst blunder” and, at the same time, argued that the Democrats’ criticisms of Trump were driven by a desire to cover up their own failures.

“The Democratic Party seems not realizing itself lurching toward conservative, being lost to its own ‘authenticity’ at the end of getting indulged in opposition just for the sake of opposition,” the article said.

Speaking to reporters in the State Dining Room on Feb. 25, Trump remained optimistic ahead of the meeting between the two countries.

“We talked about something that frankly he never spoke to anybody about, but we’re speaking and we’re speaking loud, and frankly, I think we’re going to have a tremendous summit,” Trump said.

Earlier in the day, Trump met for breakfast with governors from across the country, before he announced that he would be heading to the summit.

“With complete Denuclearization, North Korea will rapidly become an Economic Powerhouse. Without it, just more of the same,” he said on Twitter, in part. “Chairman Kim will make a wise decision!”

Meeting for breakfast with our Nation’s Governors – then off to Vietnam for a very important Summit with Kim Jong Un. With complete Denuclearization, North Korea will rapidly become an Economic Powerhouse. Without it, just more of the same. Chairman Kim will make a wise decision!

The summit last year paved the way for Kim to repatriate the long-awaited remains of some 55 U.S. soldiers killed in the 1950-1953 Korean War, fulfilling one of his promises made during the meeting. Three Americans who had been imprisoned in North Korea were also released back to to the United States last year.

Some of the criticisms of the summit came from three Democratic chairmen of House committees in a letter to the president on Feb. 21 that accused the Trump administration of withholding information on the negotiations with North Korea.

Trump responded to some of the criticisms in a broad statement.

“So funny to watch people who have failed for years, they got NOTHING, telling me how to negotiate with North Korea,” he said on Twitter. “But thanks anyway!”

Last month, North Korea’s ambassador to the United Nations, Han Tae Song, said that relations with the United States will develop “wonderfully at a fast pace” if Washington responds to its efforts on denuclearization with trustworthy measures and practical actions.