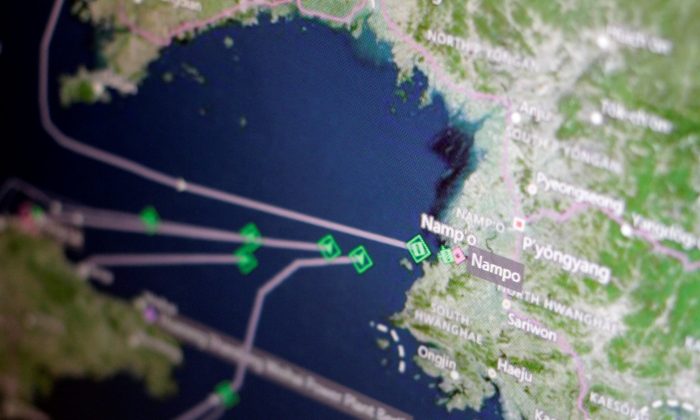 SHANGHAI—A fleet of North Korean cargo ships is heading home to the port of Nampo, the majority of it fully laden, after the Chinese regime ordered its trading companies to return coal from the isolated country, shipping data shows.

Chinese authorities did not respond to requests for official comment.

The Trump administration has been pressuring the Chinese regime to do more to rein in North Korea, which sends the vast majority of its exports to its giant neighbor across the Yellow Sea.

But U.S. Secretary of State Rex Tillerson has said last week’s U.S. military strike against Syria over its alleged use of chemical weapons was a warning to other countries, including North Korea, that “a response is likely” if they pose a danger.

At US-China Summit, Trump Says He and Xi Can Overcome Their Many Problems

As a U.S. Navy strike group headed to the region in a show of force, the Chinese regime and South Korea agreed on Monday to slap tougher sanctions on North Korea if it carries out nuclear or long-range missile tests, a senior official in Seoul said.

Eikon data shows that most of these ships have recently left Chinese coal ports, including Weihai and Peng Lai, returning to North Korea full or mostly filled with cargo.

Last month, Reuters reported that Malaysia briefly prevented a North Korean ship carrying coalfrom China from entering its port in Penang because of a suspected breach in sanctions. The ship was eventually allowed to unload its 6,300 metric tonnes of anthracite coal.

North Korea is a significant supplier of coal to China, especially of the type used for steel making, known as coking coal.

To make up for the shortfall from North Korea, the Chinese regime has ramped up imports from the United States in an unexpected boon for U.S. President Donald Trump, who has declared he wants to revive his country’s struggling coal sector.

Eikon data shows no U.S. coking coal was exported to China between late 2014 and 2016, but shipments soared to over 400,000 tonnes by late February.

This trend was exacerbated after cyclone Debbie knocked out supplies from the world’s top coking coal region in Australia’s state of Queensland, forcing Chinese steel makers to buy even more U.S. cargoes.

The other big coking coal supplier that has ramped up exports to China since the ban on NorthKorean cargoes is Russia.