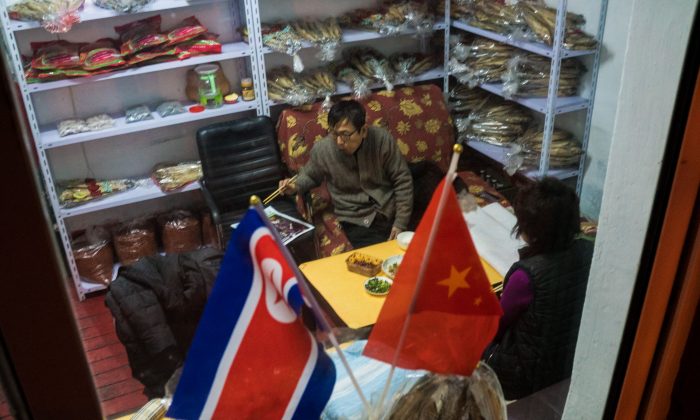 In this photograph taken on January 8, 2018, a North Korean seafood seller eats dinner at his shop with his wife in the border city of Dandong, in China's northeast Liaoning province. (CHANDAN KHANNA/AFP/Getty Images)
China

North Korean Seafood, Banned by UN Sanctions, Is Being Sold Across the Chinese Border

According to sanctions imposed by the United Nations in response to North Korea’s nuclear weapons and missile program, the export of coal, textiles, and seafood is illegal. Recent reports, however, show that crab and other seafood from the seclusive communist state is being sold in Dandong, a Chinese city located across the Yalu River that forms the natural border between North Korea and China.

“North Korean crabs are abundant in Dandong,” says a Dec. 4 report by Radio Free Asia (RFA) following a visit to the border city by their correspondents toward the end of last month.

Many North Koreans live in Dandong illegally, working for Chinese employers in clothing factories and other jobs.

The UN Security Council has subjected North Korea to sanctions of varying intensity ever since it conducted its first nuclear test in 2006. In addition to exports, North Korean nationals are barred from working abroad. China, a permanent member of the Security Council, officially abides by the UN sanctions.

According to the RFA report that in Dandong seafood markets, there are many fresh crabs and other seafood items marked as being produced in North Korea, and that shop staff are open about the origins of their wares.

“Under the sanctions of U.N., North Korean seafood can’t enter China. So those are smuggled,” Im Soo-ho, of South Korea’s Institute for National Security Strategy, told RFA. “The information we received is that Chinese exchange ships in the trans-boundary waters with North Korea. Then they ship the seafood to China.”

Im said that the Chinese first send empty transports to North Korea, then pay the North Koreans in Chinese currency and rice after the ships return full of seafood.

RFA reporters found that Chinese businessmen ship raw textiles to North Korea, which are made into clothes and smuggled back. RFA also found several clothing factories in Dandong that hire North Korean workers.

Another common occurrence is that of drivers making sure their gas tanks are full before returning to North Korea, which is chronically short of petroleum.

RFA said some individuals told them of rare earth metals being exported to China from North Korean mines via Dandong, but that the reports could not be verified.