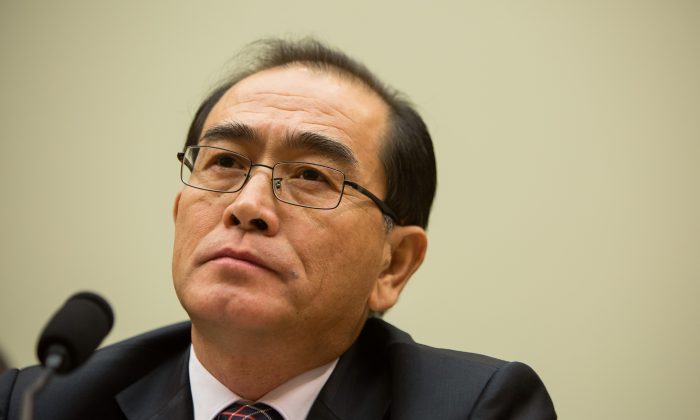 The brutal oppression, thought-control, and endemic poverty of communist North Korea stands in stark contrast to its southern neighbor, where the quality of life is so much better that even its TV dramas are considered a critical threat to the North Korean regime.

According to Thae Yong-ho, a former deputy chief at the North Korean embassy in London, that threat needs to be weaponized.

Thae, who defected to South Korea last year with his wife and two sons, said the west needs to get information into the country that is specially tailored to help North Koreans break out of the Kim regime’s systematic brainwashing.

“We now know that the communist systems of the Soviet Union and East European countries crumbled as a result of the dissemination of outside information,” Thae told the House Foreign Affairs Committee in Washington, DC on Nov. 1. “Indeed, the Berlin wall would not have easily collapsed if East German people did not regularly watch West German TV.” With that information came a change in thinking among the population, a tide of understanding that led to widespread anger at East Germany’s systemic suppression of its people.

Thae said the same awakening can be achieved for North Koreans if the population attains access to more outside information, giving them the courage to stand up to the Kim regime. According to Thae, the regime is already suffering a credibility crisis.

“The citizens do not care about state propaganda but increasingly watch illegally imported South Korean movies and dramas. The domestic system of control is weakening as the days go by,” he said.

While it was impossible to imagine a popular rejection of the Kim regime in 2010, North Koreans are learning about the reality of their living conditions. Thae said the power of public opinion will leave the North Korean leadership no choice but to change course or “face the consequences of their escalating dissatisfaction.”

But while the United States applies diplomatic and military pressure on the regime, which Thae applauded the Trump administration for, he said not nearly enough was done to capitalize on the West’s most critical advantage—the truth.

“The U.S. is spending billions of dollars to cope with the military threat. Yet how much does the U.S. spend each year on information activities involving North Korea in a year? Unfortunately, it may be a tiny fraction.”

The Kim regime has maintained its survival through a reign of terror backed up by aggressively blocking the free flow of information in the country, but those tools are showing wear.

“The existence of a prosperous and democratic South Korea so close to the border is, by itself, a major threat towards his dynasty,” said Thae.

North Korea once held public executions to try to stop people there from smuggling in South Korean dramas that they watched purely for entertainment.

When that didn’t work, the regime resorted to importing film content from other communist regimes, and even disseminating cartoons from the West.

While South Korean content helps North Koreans see the difference in their standard of living, the programs are made for South Korean audiences.

Thae is convinced that if the West produced tailor-made content for North Koreans and had it disseminated en masse, it could transform the country.