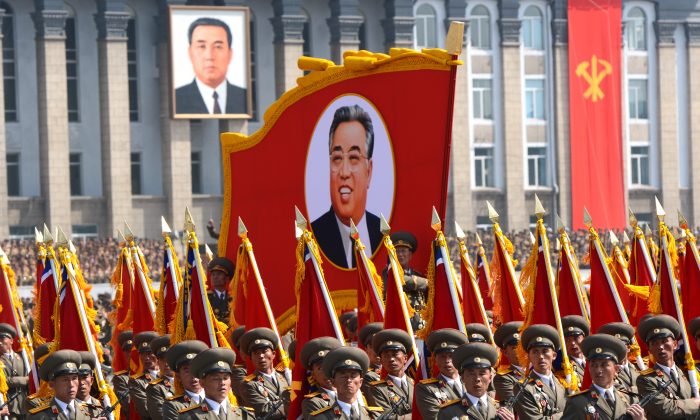 North Korean soldiers march with a portrait of founder Kim Il-Sung on the anniversary of his birth on April 15, 2012. North Korea may launch missiles on April 15, 2013. (Pedro Ugarte/AFP/Getty Images)
Asia & Pacific

South Korea, US step up threat alert
By Tara MacIsaac

North Korea intimated that it might do something drastic on, or anytime after, April 10—last week it warned foreign embassies in Pyongyang to clear their people out by that date.

April 15 marks the birthday of North Korea’s late founding leader Kim Il Sung. Last year, on what would have been his 100th birthday, North Korea unsuccessfully launched a rocket.

South Korea and the United States have raised their surveillance alert level one step, from Watchcon 3 to Watchcon 2, reports Yonhap news agency.

North Korea has a ballistic missile ready to launch that could reach the U.S. territory of Guam.

South Korean Foreign Minister Yun Byung-se told Yonhap Wednesday: “The Musudan missile has a range of 3,500 kilometers (about 2,200 miles) and it’s up to North Korea how far it would fly.”

Satellite imagery also shows what could be launch platforms for several other short-range scud missiles and medium-range Nodong missiles, reports Yonghap, able to reach something like 200 miles and 600 miles respectively.

United Nations (U.N.) Secretary General Ban Ki Moon expressed his concerns to reporters during a press session in Rome, Italy, on Wednesday transcribed on the U.N. website: “If any small incident [occurs,] caused by miscalculation or misjudgement, it may create [an] uncontrollable situation.”

Ban, a South Korean, is particularly close to the matter, but said he speaks about it as the U.N. secretary general, and not as a Korean citizen. He said he will discuss the situation with U.S. President Barack Obama on Thursday and has spoken to leaders in the Chinese regime, North Korea’s traditional ally.

The U.N. Security Council will convene if North Korea fires the Musudan missile, as it would violate U.N. restrictions on the country.

On Wednesday, South Korean officials also announced they had determined North Korea’s guilt in the large-scale hacking of local financial firms and broadcasters in March.

Lee Seung-won, an official at the Ministry of Science, is quoted by Yonhap: “An analysis of cyber terror access logs, malicious code and North Korean intelligence showed that the attack methods were similar to those used by the North’s Reconnaissance General Bureau, which has led hacking attacks against South Korea.”

On the streets of Pyongyang, the focus was less on preparing for war and more on beautifying the city ahead of the nation’s biggest holiday. Soldiers laid blankets of sod to liven up a city still coming out of a long, cold winter; gardeners got down on their knees to plant flowers and trees, and students marched off to school—ordinary springtime activities belying the high tensions.

Downtown, schoolchildren headed toward the towering statues of the two late leaders, Kim Il Sung and Kim Jong Il, dragging brooms behind them. The brooms are used to sweep the plaza where the bronze statues stand on a hilltop overlooking Pyongyang. A group of women with coats thrown over traditional dresses rushed through the spring chill after leaving a rehearsal for a dance set to take place for Kim Il Sung’s birthday celebrations.

The Associate Press contributed to this report.