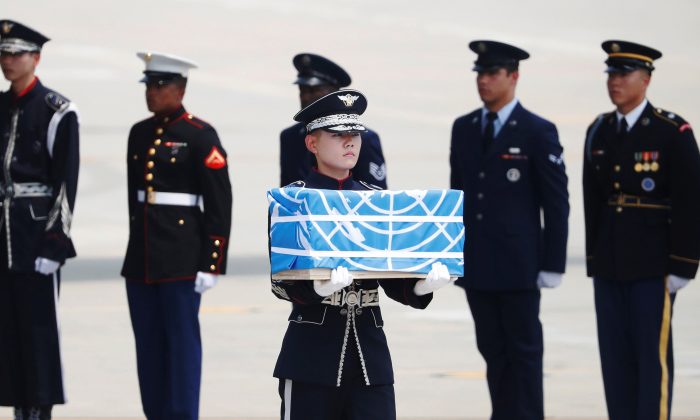 A soldier carries a casket containing the remains of a U.S. soldier who was killed in the Korean War during a ceremony at Osan Air Base in Pyeongtaek, South Korea, July 27, 2018. (Reuters/Kim Hong-Ji/Pool)
Trump Administration

WASHINGTON/SEOUL—North Korea transferred the remains of an unspecified number of soldiers killed in the Korean War, the White House said on Thursday, a first step by Pyongyang to implement an agreement made in a landmark summit in June in Singapore.

The repatriation of remains of U.S. soldiers missing in the 1950-53 conflict is seen as a modest diplomatic coup for U.S. President Donald Trump because it was one of the agreements reached during his summit with North Korean leader Kim Jong Un in Singapore on June 12.

“Today, (Kim) is fulfilling part of the commitment he made to the President to return our fallen American service members. We are encouraged by North Korea’s actions and the momentum for positive change,” the White House said in a statement.

A U.S. military transport plane flew to an airfield in North Korea’s northeastern city of Wonsan to bring the remains to Osan air base in South Korea, the statement said.

A formal repatriation ceremony would be held at Osan on Wednesday, it said.

The transfer of the remains coincided with the 65th anniversary of the 1953 armistice agreement that ended fighting, although the two Koreas are technically still at war because a peace treaty was never signed.

The pledge to transfer war remains was seen as a goodwill gesture by Kim at the June summit and, while it has taken longer than some U.S. officials had hoped, the handover will rekindle hopes for progress in nuclear talks.

He and everyone else knows exactly what denuclearization requires, according to the US secretary of state. The media is just being critical because the US didn’t make NK settle on a timeline.

South Korean President Moon Jae-in has said the return of the remains could boost the momentum for the nuclear talks between Pyongyang and Washington.

More than 7,700 U.S. troops who fought in the Korean War remain unaccounted for, with about 5,300 of those lost in what is now North Korea.

By Eric Beech and Joyce Lee