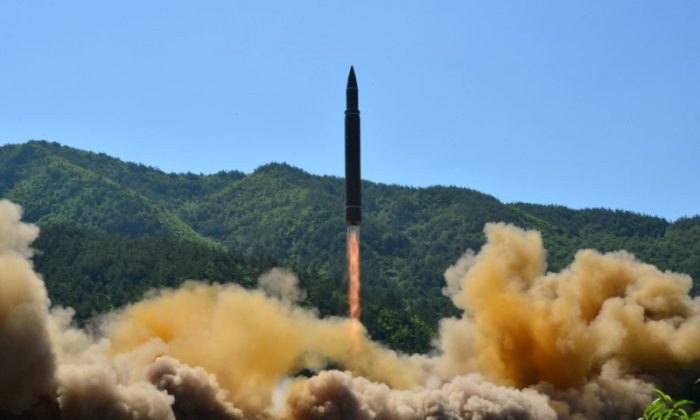 SEOUL/WASHINGTON—North Korea said on Wednesday it had successfully tested a new type of intercontinental ballistic missile (ICBM) that could reach all of the U.S. mainland.

The missile test, North Korea’s first since mid-September, came a week after U.S. President Donald Trump put North Korea back on a U.S. list of countries it says support terrorism, allowing it to impose more sanctions.

North Korea has conducted dozens of ballistic missile tests under its leader, Kim Jong Un, in defiance of international sanctions. Trump has vowed not to let North Korea develop nuclear missiles that can hit the mainland United States.

In a broadcast on state TV, North Korea said the new powerful missile reached an altitude of around 4,475 km (2,780 miles) – more than 10 times the height of the international space station – and flew 950 km (600 miles) during its 53-minute flight.

After watching the successful launch of the new type ICBM Hwasong-15, Kim Jong Un declared with pride that now we have finally realized the great historic cause of completing the state nuclear force, the cause of building a rocket power, according to a statement read by a television presenter.

In the statement North Korea described itself as a “responsible nuclear power”, but warned its strategic weapons were developed to defend its sovereignty and territorial integrity from “the U.S. imperialists’ nuclear blackmail policy and nuclear threat”.

U.S., Japanese and South Korean officials all agreed the missile, which landed within Japan’s exclusive economic zone in the Sea of Japan, was likely an ICBM but it did not pose a threat to the United States, its territories or allies, the Pentagon said.

“It went higher frankly than any previous shot they’ve taken, a research and development effort on their part to continue building ballistic missiles that can threaten everywhere in the world, basically,” U.S. Defense Secretary Jim Mattis told reporters at the White House.