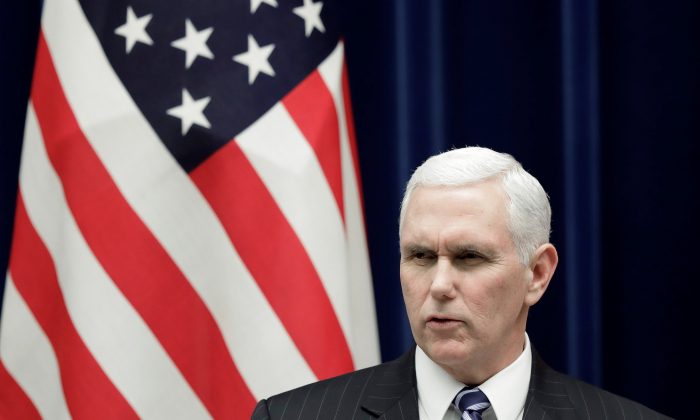 SEOUL, South Korea–North Korea has no intention of meeting U.S officials during the Winter Olympics that start in South Korea on Friday, state media reported, dampening hopes the Games will help resolve a tense standoff over the North’s nuclear weapons program.

U.S. Vice President Mike Pence, who described North Korea as the world’s most tyrannical regime on Wednesday, flies in to South Korea on Thursday ahead of the opening ceremony in the mountain resort of Pyeongchang, just 50 miles from the heavily armed border with North Korea.

The ceremony will also be attended by a senior delegation of North Korean officials, including the younger sister of leader Kim Jong Un and the North’s nominal head of state, Kim Yong Nam.

The sister, Kim Yo Jong, and other members of her entourage will travel by private jet to Seoul’s Incheon International Airport on Friday afternoon, North Korea informed the South on Thursday.

However the prospect of talks, which Pence downplayed but left open, appeared slim.

“We have never begged for dialogue with the U.S. nor in the future, too,” the North’s KCNA news agency reported on Thursday, citing Jo Yong Sam, director-general of the North American department of North Korea’s foreign ministry.

“Explicitly speaking, we have no intention to meet with the U.S. side during the stay in South Korea … Our delegation’s visit to South Korea is only to take part in the Olympics and hail its successful holding,” Jo said.

South Korea wants to use the event to re-engage with North Korea and open the way for talks to resolve one of the world’s most dangerous crises, in which U.S. President Donald Trump and Pyongyang have swapped nuclear threats.

Pence had said after meeting Japanese Prime Minister Shinzo Abe in Tokyo on Wednesday that Washington would soon unveil “the toughest and most aggressive round of economic sanctions on North Korea ever”.

He said before departing for Seoul the United States wanted to peacefully dismantle North Korea’s nuclear program but warned Pyongyang not to underestimate U.S. military strength or resolve.

North Korea marked the founding anniversary of its army with a large military parade in Pyongyang on Thursday, a government official told Reuters, having last month changed the date of the celebration to the eve of the Olympics. The official asked not to be identified because of the sensitivity of the issue.

Domestic media reports said the parade was smaller than those of previous years.

Pence will meet South Korean President Moon Jae-in in Seoul later on Thursday. On Friday, before he attends the Olympic opening ceremony, he will visit a memorial for 46 South Korean sailors killed in 2010 in the sinking of a warship that Seoul blamed on a North Korean torpedo attack.

Pence is taking the father of Otto Warmbier, an American student who died last year after being imprisoned in North Korea for 17 months.

Kim Yo Jong, the 28-year-old sister of the North Korean leader, will be sitting in the same stadium as VIP guests along with ceremonial head of state Kim Yong Nam.

She will be the first member of the Kim family to cross the border into the South. Kim Yo Jong is a propaganda official and was blacklisted last year by the U.S. Treasury Department over alleged human rights abuses and censorship.

Japan’s Abe, whose nation has been within range of North Korean missiles for decades, will also attend the ceremony, adding to seating complications for the hosts.

South Korea asked the United Nations on Wednesday for an exemption to allow a U.N.-sanctioned North Korean official, Choe Hwi, to attend the opening ceremony with Kim Yo Jong.

The Unification Ministry in Seoul said no decision had been made yet on Choe Hwi and Pyongyang had not mentioned any change in their plans to send him.

A group of 280 North Koreans arrived in South Korea on Wednesday to support athletes from the two sides at the Games. The group included a 229-member cheer squad, taekwondo performers, journalists and the sports minister.

Preliminary competition at the Games began on Thursday, with events including curling and ski jumping.

Organizers have already been battling some challenges, including a stomach virus that has affected dozens of staff and a fire near the Olympic media village on Thursday that produced thick black smoke but was quickly extinguished.

By Christine Kim and Hyonhee Shin